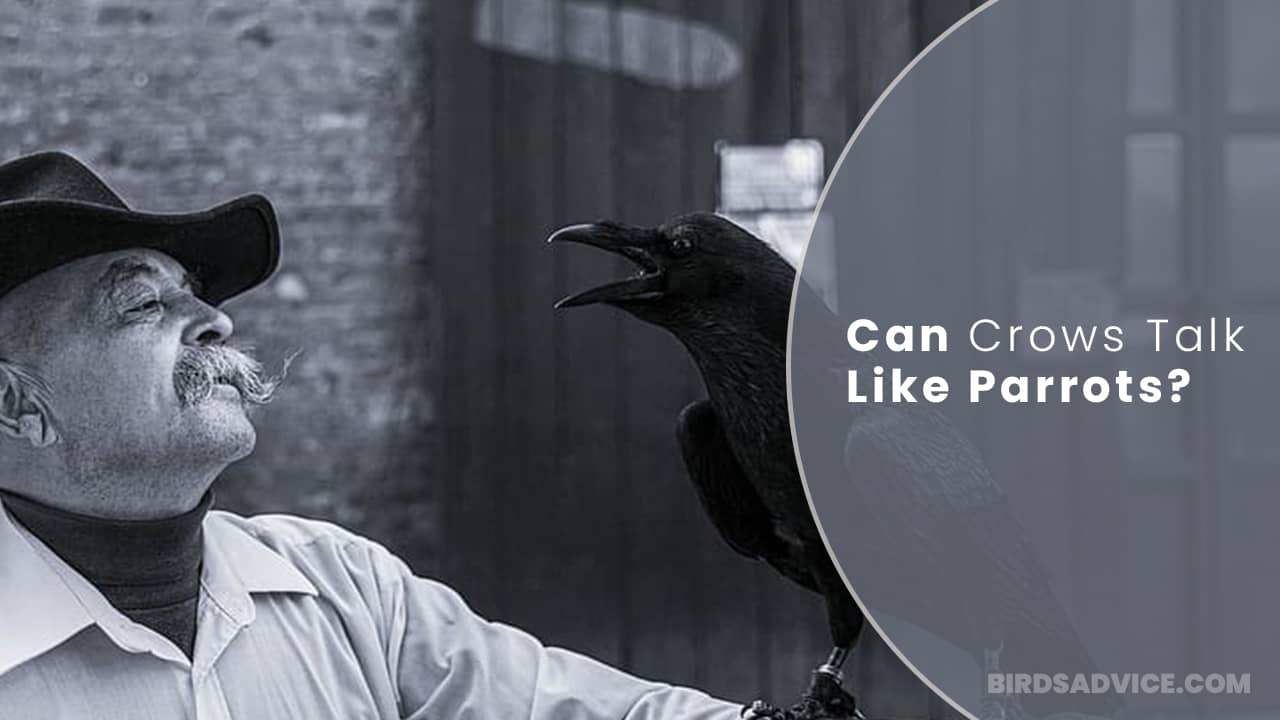 Hearing birds mimicking the speech of humans is fascinating. There are a few talking birds in the avian world. Budgerigars, parrots, parakeets, and blue-fronted amazons are significant. Among them, parrots can talk and mimic human voices pretty flawlessly.

Now, this may lead you to wonder, can crows talk like parrots? Yes, crows can talk in the same way as parrots do, using their syrinx to mimic words and sounds they hear and repeat them. Despite not always being so close to humans, they’re pretty good at mimicking human speech without any mutilating.

In this article, we’re going to take a look at whether or not crows can talk like parrots and how you can teach them to talk. Here is another article for you: the meaning of crows gathering around your house. You can have a quick look at it.

Believe it or not, crows can really talk but are less likely to speak than parrots. This is because they cannot use their tongues the way parrots can. Since they’re not so close to humans like parrots are, you may find a significant difference in their vocabulary and fluency.

While parrots feel comfortable chatting with humans, crows don’t talk to unknown people. That’s why the Guinness World Record holder for recognizing the 1,728 words is Puck, a cherry blue parakeet. So, crows are not as good speakers as parrots.

Yes, crows can say hello. When crows are around people at a wildlife park or the zoo, they can hear the people saying hello. They pick up the specific word right away and keep repeating it several times until they feel like it.

However, crows may not understand what they’re saying. As we already know, they mimic human speech much like parrots by using their syrinx, a vocal organ in birds, which is commonly known as a voice box. Here is a YouTube video for you.

How Do Crows Talk?

Crows don’t talk the same way as humans do. They mimic words and sounds with the help of their syrinx. They remember what they have heard and try to recall them exactly the same way. There are several things through which crow can mimic sounds.

Crows mainly mimic sounds using their syrinx, which is a unique vocal organ, also called a voice box. In this case, their tongues don’t have a role in forming sounds. Basically, crows mimic sounds without understanding anything.

Thanks to the great memory, crows can talk and mimic words faster than other bird species. Although they have smaller heads compared to the rest of their body, their intelligence surpasses other birds. They can also recognize various patterns and tools.

Typically, a crow’s brain has around 1.5 billion neurons (information messengers). In a crow’s brain, song nuclei are formed by the clusters of neurons. That’s why crows can mimic words and even formulate full sentences.

Why Have You Never Seen A Talking Crow?

The main reason is crows are not always close to humans like parrots. They’re not often kept as pet birds as well. Consequently, picking up words to mimic can be difficult for them. On the other hand, parrots are domestic birds, which can mimic human words so easily.

However, crows can learn and mimic human speech very well in captivity. In some cases, they can mimic words almost as well as parrots. If you go to a wildlife park and find a crow there, teach it some greetings, like hello, good morning, etc. You won’t believe they’re fast learners.

Can You Teach A Crow To Talk?

Yes, you can teach a crow to talk, especially in captivity. Crows are so intelligent that they can learn cognitive language skills when you say words in front of them. You don’t need to fork a crow’s tongue to make it talk. It’s absolutely a myth.

However, crows may not appropriately pronounce your words, while parrots can mimic your words more clearly. Parrots may learn to repeat their name, but crows can ask for a specific food, count how many toys they have, or reply to your greetings.

How Do You Teach A Crow To Talk?

Teaching a crow to talk can be easier if you raise it in your home from its childhood. You can also train a crow to speak if it visits your backyard every day. In order to help a crow talk, here are a few simple tips you can follow.

Small and simple words, such as hello, hi, peekaboo, good morning, night-night, goodbye, etc., could be great starters. As you repeatedly say the words, the crow will mimic you. With time, the crow can mimic many words and sounds, which will surprise you.

Tip – 2: Say the Words with Enthusiasm

Tip – 3: Give the Crow Rewards after Properly Saying a Word

Offering treats is one of the most effective tools to train a crow to mimic words. To make the crow interested in learning the words, you can give it rewards whenever it mimics a word properly. Praise the crow when it tries really hard.

Studies show that young crows are more capable of mimicking words than adult ones. Compared to adult crows, young ones require fewer efforts. If you’re willing to teach a crow to talk, you better teach a young crow.

Tip – 5: Build Trust with the Crow

One of the most important things to teach a crow to talk is to build trust with it. Spend much time with the crow and allow it to make a good bond with you. If the crow doesn’t trust you, it will be difficult for you to teach it anything.

Can All Crows Talk and Mimic?

Honestly speaking, all crows cannot talk like parrots even if they have the intelligence and capability of talking and mimicking words and sounds. This is because some crows might be shy to speak. They don’t even want to express themselves in this way.

Besides, each crow cannot mimic with the same fluency even if they’re given the same training. Crows living far away from people may never pronounce a human word or sound in their entire life. However, young crows can mimic far more words than their parents.

Are Crows The Only Corvid Capable Of Talking Like Parrots?

Crows are not the only corvid that can talk and mimic human sounds. Due to the syrinx, other corvids, like ravens, magpies, blue jays, choughs, jackdaws, rooks, and red-winged blackbirds can also mimic certain sounds and even human words.

Ravens and jackdaws can talk and mimic sounds like barking, drills, and car horns. If you want to attract ravens and other corvids to your backyard, you have to put suitable food, place a good decoy to attract them, and invest in a birdbath.

In a nutshell, crows can mimic human sounds pretty well. As they’re not always around humans, they need to be taught a few words, like good morning, hello, and more. This training can be difficult and time-consuming because crows are not as fast learners as parrots.

However, we hope you have learned a lot about how crows talk and mimic words and sounds. If you have ever taught a crow to talk, share the experience, whether it’s difficult or simple, with us below in the comment section.