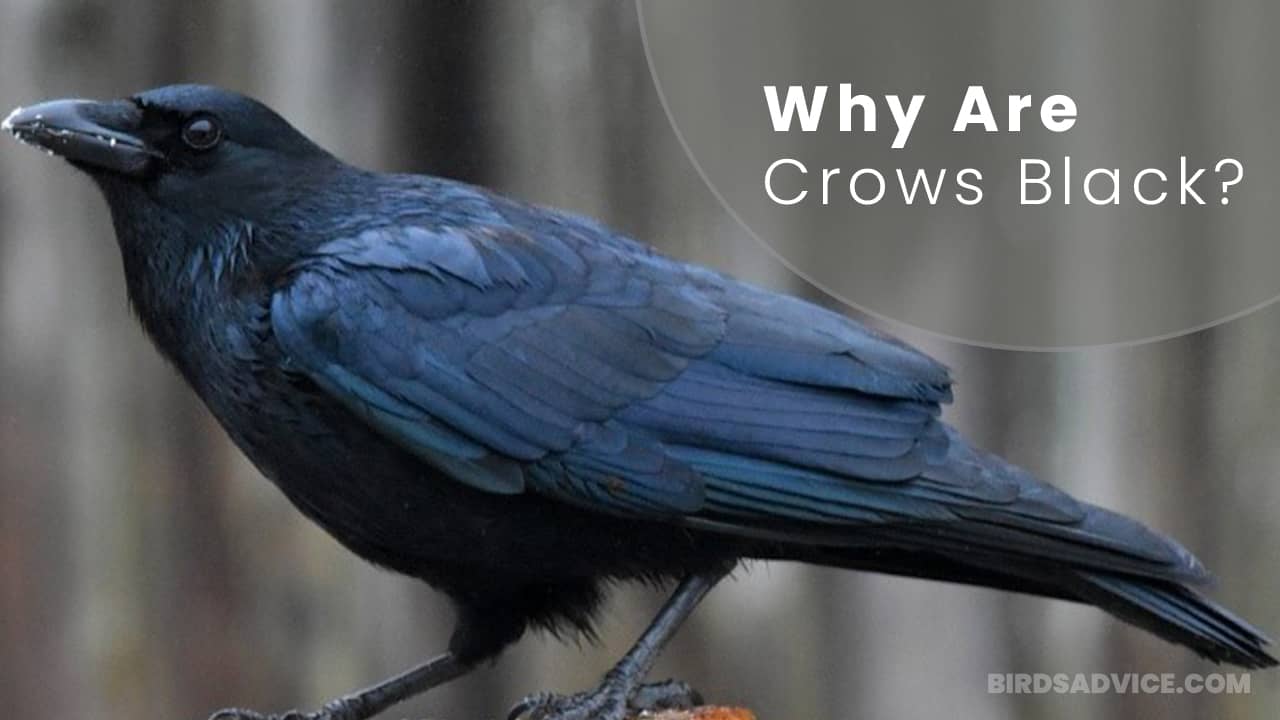 Among 10,000+ bird species in the world, more than 900 bird species have ever been recorded in North America. Surprisingly, there are only two completely black birds, American crows and common ravens, out there in the United States.

This may lead you to wonder, “Why are crows black?” Most probably, American crows carry the highest amount of dark pigment-producing melanin in their feathers, and therefore they’re all black. Evolution didn’t make crows black, and their all-black feathers didn’t hinder their survival. They have been black since their first arrival in the world.

Apart from that, there are some other reasons why crows are black. In the article, we’re going to talk about all that. Once you finish reading this article, we would recommend you take a look at our recently published article on the battle between crows and eagles.

Why Crows Are Black Scientifically

Scientifically, crows are black due to the melanin structures in their feathers. If a crow doesn’t carry enough melanin that crows are supposed to have, the crow might come with different colors, like brown, grey, light grey, and even white.

In the past, a mutation may have resulted in crows’ DNA. They bred more successfully with that mutation and passed the mutation to future generations. This is probably the reason why crows remain black for years.

Why Crows Are Black In Mythology

According to the Greeks & Romans, Apollo is the most powerful Greek God Zeus’s son. He and his mistress Coronis were associated with crows because the Greek word for crow is corone, which derives from the word Coronis.

Even though Apollo and Coronis loved each other, she left him to marry Ischys who belonged to the lower class. The crow, which was white, brought the news to Apollo. He became so incensed and burned the crow’s feathers and then Coronis to death.

In another version, Coronis turned herself and Ischys into black crows. Greeks saw a mated pair of crows representing a forbidden love. Many people think that Coronis was the first woman who married below her class for love.

According to old Chinese myth, a few phoenixes slept on the tree one day. Suddenly, the tree was on fire. All phoenixes, except one, managed to escape from there. The remaining phoenix’s feathers got burned and turned black. Then, people started calling it crow.

Why Crows Are Black In Stories

There are a lot of stories that explain why crows are black. In this section, we’re going to discuss three of them, which grandparents usually narrate to grandchildren as bedtime short stories. These stories have nothing in common with reality.

Story – 1: Friendship between Crows and Buffalos

Long ago, all crows were white. People didn’t have horses, iron weapons, and let alone firearms. They had to survive by hunting buffalos with stone-tipped weapons. This was hard for the hunters and crows, then the friends of buffalos, make things even harder.

One day, the people sat in a council to decide how to solve the problem. One wise old chief suggested capturing the big white crow and punishing him hard. The chief brought a large buffalo skin with the horns. A young, brave man wore the buffalo skin.

After the young man disguised as a buffalo, he sneaked among the herd of buffalos and pretended to keep grazing. The fellow buffalos didn’t pay any attention to him. After that, the people with their bows approached the herd.

Once the crows saw the people coming to the herd, they flew to the buffalos and warned them. All the buffalos stampeded except the young man who disguised as a buffalo. Then, the big white crow came and said, “Are you deaf? The hunters came close. Protect yourself!”

In the meantime, the young man came out of the buffalo skin and grabbed the crow by its legs. He tied the crow’s feet with a string and the other end of the string to a stone so that the crow couldn’t escape. Again, the people held a council to decide what to do to the crow.

One angry hunter said, “I’ll burn the crow up.” Before anyone could stop him, he snatched the crow from the captor’s hands and threw it into the council fire ring. The string used to tie the crow burned at once, and the crow could fly out of the fire to save himself.

However, it couldn’t protect its feathers from the fire and became no longer white. It heavily cried and promised not to warn the buffalos. All crows promise with the big crow. Finally, crows have been black since then.

One day, Mr. Crow, who was white, was fighting with Mr. Turkey, who was quite ugly. During the fight, Mr. Turkey proposed not to fight and be friends. He would like to meet Mr. Crow at the park to take their friendship to the next level. Mr. Crow agreed to the proposal.

The next day, Mr. Crow went to the park. He was surprised that Mr. Turkey was waiting for him. Both agreed to play inside dark paint. When they were playing, Mr. Crow became tired and flew to water to wash himself. Unfortunately, the paint didn’t come off.

Other crows noticed it and considered it necessary for them. Although Mr. Crow warned them, they rubbed black paint on themselves. After a while, they got tired and approached to wash themselves. But, it didn’t come off. This is how all the crows became black.

How Did Crows Turn Black? (Evolution of Crows)

According to the Native American tradition, the crow wore all the colors of the rainbow when he first came into the world. At that time, all other birds and animals were black. They teased the crow because he was different from them. The crow was very sad.

In order to look more like them, he shook himself until all the colors flew out and landed on other animals and birds, like blue jays were covered in blue, robins in orange and woodpeckers in a bit of red. There was only black color left on the crow.

Are All Crows Black?

No, all crows are not thoroughly black, except American crows. Some of them have different shades of black with distinctive grey markings, like house crows in India, while others can be grey, light grey, brown, blue, cream, and even pink in their feathers.

You may also find some completely white albino crows. Typically, they become white due to the lack of dark pigment-producing melanin. However, some of them are partially white, showing some white patches on parts of their body.

Do Crows Look Black To Other Crows?

Crows may not look black to other crows because they see the surroundings in more spectrums of light than humans do. How we see the iridescence of crows could be different in the eyes of other crows and even other bird species.

Humans see most crows, particularly American crows as black. Both male and female crows look similar in our eyes. On the other hand, crows can identify their males and females by selecting colors and patterns in their own way.

What Are The Benefits of Having Black Plumage?

Crows use their black plumage for –

Thanks to the black plumage, crows can protect themselves from the harsh winter cold. As you may know, dark feathers can gather the highest amount of heat. When crows roost in riparian zones, their black feathers help them to survive.

Crows remain protected from parasites due to their black plumage. This doesn’t mean that they don’t have any parasites. In fact, they’re less prone to parasites because of their dark feathers. FYI, the most common disease in crows is West Nile Virus.

Since crows feature black feathers, they can camouflage them in order to avoid detection when resting at night. Crows usually live in large flocks with fledglings and yearlings. So, they need to keep many eyes on potential predators. Black feathers help them a lot.

In summary, crows are black because of the presence of dark pigment-producing melanin in their bodies. In our opinion, the myths and stories about how crows turned black are not true. They’re just stories not scientifically proven.

However, we hope you have learned a lot about why crows are black and whether all crows are black or come in other colors. If you know any other scientific reason why crows became black, you can share it with us below in the comment section.