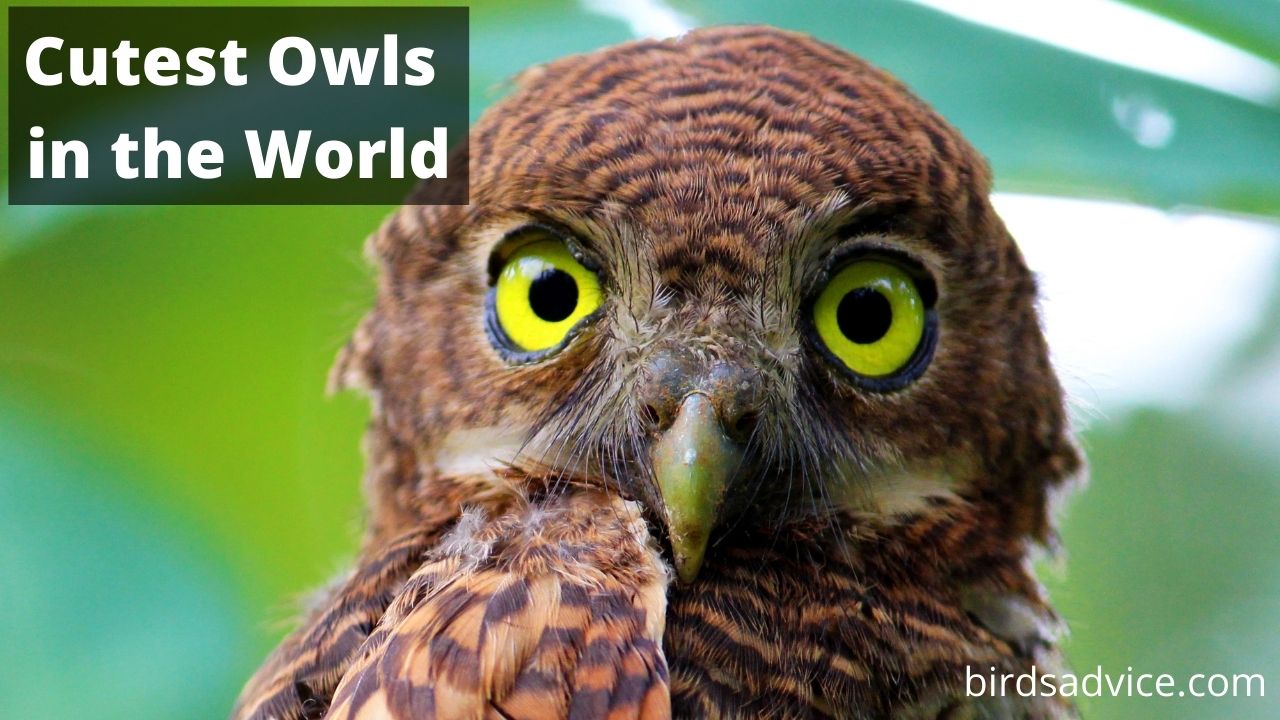 When you think of an owl, you don’t necessarily think of a fierce predator that can take out its prey with lighting-speed precision.

And this is probably because they just look too cute to think of in this way. Those big, round faces and fluffy bodies are just adorable. Not to mention their hilarious legs!

But which owl is the cutest?

There are around 250 owl species in the world, which doesn’t make finding the cutest of them very easy. But, we’ve done some research and narrowed them down.

Here you’ll find the top 15 cutest owls in the world. From the appropriately named Little Owl to the lesser-known Jungle Owlet, prepare yourself for an onslaught of cuteness!

The Little Owl doesn’t only look cute – it also has one of the cutest names for an animal that you’ll ever come across.

As you may have guessed from its name, this owl is very small and measures around 8 inches on average.

It’s native to Asia, North Africa, and Europe and has a flat head that just adds to its cute appearance.

The Elf Owl is native to Mexico, and they are even smaller than the Little Owl, standing at just 5 inches tall and weighing no more than 50g.

This makes it about the same size as a sparrow.

Like all owls, it has huge eyes that, compared to its size, give it a super-cute appearance.

The Western Barn Owl has a heart-shaped face and black eyes and is bordering on majestic rather than cute.

There’s no denying that white heart shape is cute though, and there’s something almost romantic about their penetrating eyes.

Western Barn Owls are found all over the world, with the exception of desert and polar regions.

With long legs and a stubby little body, the Burrowing Owl simply had to be included on this list.

While it can fly, the Burrowing Owl prefers to spend most of its time on the ground, running around and hiding underground when it feels threatened, which adds to its cuteness factor.

Native to Mexico, Florida, Western USA, and the Caribbean, this little owl is about the same size as a crow.

Found in the forests of Northern Europe and Northern Asia, the Ural Owl can be identified by its mottled brown and white markings.

Its cuteness is upped by its large, pale face and black eyes along with its small size.

Like the Western Barn Owl, the Ural Owl also has a heart-shaped face disk, adding to its cuteness even more!

With a name like “Flammulated”, there’s no way we couldn’t include this tiny owl on our list of cutest owls.

Only slightly bigger than a sparrow, the Flammulated Owl is covered in mottled brown feathers and has almost comically large eyes for such a tiny head.

This owl spends its winters in Mexico and Central America but returns to the Western United States to breed throughout the spring and summer.

Its small size does make it quite tricky to spot but if you are lucky enough to see you, there’s no way you’ll be able to deny just how cute it is.

Another tiny owl that is around the same size as a Robin, the Eastern Screech Owl has tree bark-like markings all over its body.

It also has two pointed feathers on the top of its head, making it look like it has ears sticking straight into the air.

This cute little owl can be found throughout the Eastern United States all year round.

Found in Asia, the Spotted Owlet is another small owl that measures around 8 inches in length.

As with most small things, this minute size enhances its cuteness, but its appearance also gives it the upper edge in the cuteness stakes.

Covered in fluffy, mottled white feathers, you just want to pick this owl up and cuddle it close!

Until recently, you might have thought of the Snowy Owl as more of a majestic bird of prey rather than cute.

However, thanks to Harry Potter and the introduction of the character “Hedwig,” this owl has been shooting up in the cuteness polls.

Their bright white feathers and fluffy legs give them a look of cuteness, as do their bright yellow eyes.

Don’t be fooled, though. This Snowy Owl is one of the most effective assassins in the bird world and can successfully hunt and devour as many as 1600 lemmings every year.

It’s easy to see how the Spectacled Owl got its name.

Two black markings over each eye make it look like it’s wearing glasses, and this is one of the things that makes it so cute.

It also has a round head, large eyes, and a fluffy body, increasing those cuteness levels even more.

The Spectacled Owl is one of the larger owl species on this list, measuring up to 20 inches. It can be found in Central and South America.

The Southern White-Faced Owl has some long feathers that hang over the top of its beak, giving it the appearance of having a bushy white mustache.

It also has large yellow eyes, a heart-shaped white face, and swept-back gray feathers on the top of its head.

All of these things add up to create one super-cute owl.

They’re also relatively small, measuring in at 10 inches long which, of course, only adds to their cuteness.

Two super-long ear tufts give this owl a cute but very wise appearance.

It also has delicate, buff-colored feathers all over its body, but it’s ultimately the white tufts on either side of its small head that make it a contender for the world’s cutest owl!

Crested Owls are native to Central and South America. They’re also non-migratory and spend all year round in these parts of the world.

Found living in the forests of Europe and North America, the Boreal Owl is covered in black and white feathers.

It also has that ever-cute heart-shaped face disc that so many of the cutest owls in the world have.

They’re also very small, measuring about the same size as a Robin.

Male Boreal Owls can be even smaller than this. And, as if that wasn’t enough to make them one of the cutest owls, they also have a charming courting ritual.

The male will attract a female by feeding her for three months before they begin nesting!

Another super-small owl, the Northern Pygmy Owl, measures just 6.5 inches long and weighs around the same as a tennis ball.

It also has a round, fluffy body that, along with its small size, really makes it one of the cutest owls we’ve ever seen.

Interestingly, there are 29 species of Pygmy Owl worldwide, but the Northern Pygmy Owl sets up its home all year round in North America.

The Jungle Owlet rounds off our list of the world’s cutest owls, and, with its tiny 8-inch body and small round heads, there’s no way we couldn’t include them.

They’re also one of the few owls in the world that don’t have ear tufts, making their heads look so small and perfectly round.

As you may have guessed from their name, the Jungle Owlet can be found living in the jungles of India, where it resides all year round.

As you can see, there are so many cute owls out there in the world, and this is just a handful of the ones that we think are the cutest of the cute!

So, next time you feel you need a little pick-me-up, return to this list and bask in the cuteness that these 15 owls have to offer!