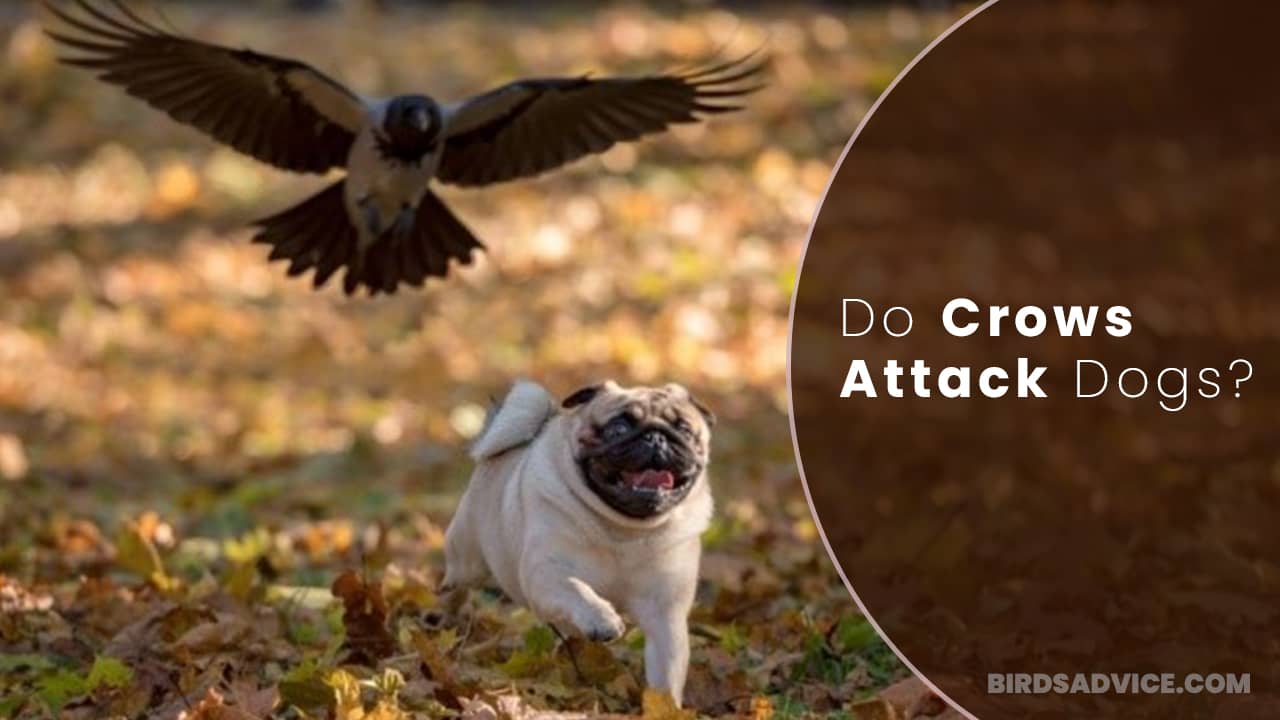 When it comes to making a list of the most intelligent birds in the world, crows must be one of them. These highly intelligent birds can remember people and other animals who are mean to them. They hold grudges and wait for the opportunity.

Contents show
1 Why Do Crows Attack Dogs?
2 When Are Crows Likely To Attack Dogs?
3 Can Crows Swoop On Puppies and Carry Them Away?
4 Can Crows Kill Dogs?
5 Can Crows Eat Dogs?
6 How Can You Protect Your Dog From Crow Attack?
6.1 1. Identify The Crow Territory
6.2 2. Distract Them With Their Favorite Treats
6.3 3. Set Motion Activated Sprinklers
6.4 4. Divert The Crows With Owl Decoys
6.5 5. Keep Your Dog Indoors
7 What To Do If A Crow Attacks Your Dog
8 Final Words

Now, the question is, do crows attack dogs? A murder of crows can attack a dog if the dog attempts to be close to the crow nests, fledglings (baby crows), or even eggs. A single crow might also attack a dog, but the dog would physically be much more of a threat to the crow.

In this article, weâ€™re going to discuss why crows attack dogs, when crows are likely to attack dogs, whether crows can kill dogs or not, and how you keep your dog away from crow attacks. Here is another article for you: telling a crow from a raven apart.

Why Do Crows Attack Dogs?

Crows can attack your dog if itâ€™s near the crow nests, eggs, or fledglings (baby crows). Once your dog is about to harm the babies, the parents are likely to dive-bomb the back of the dog. Otherwise, they make loud noises and do fly-bys.

Besides, crows may attack dogs to protect themselves from dog attacks. If a crow is vulnerable to a dog, its fellow birds will quickly come to protect it from the dog. It can be called a defensive attack. Sometimes, a murder of crows can attack dogs to steal their food.

When Are Crows Likely To Attack Dogs?

May, June, and July are the months when crows are likely to attack other animals, particularly small dogs. Not only crows, but many other songbirds, like cardinals, sparrows, blue jays, and finches, can also be aggressive to puppies.

Basically, crows become very aggressive and territorial during the period. They donâ€™t allow people and other animals, like cats, dogs, snakes, etc., near their nests. Once they believe that a threat is near, they attack to remove the threat.

Can Crows Swoop On Puppies and Carry Them Away?

Yes, a murder of crows can swoop on puppies and carry them away. A four-month-old Chihuahua puppy was snatched and carried away by crows from the back garden in Melbourne in May 2016. The owner heard the puppy screaming while carrying away by crows.

She was hopeful that her dog is still alive after the incident. Her owner Heather Sinderâ€™s daughter Melinda Pride told that the dog spent most of its time inside the house. Once it had gone outside to urinate, the murder of crows got the opportunity.

The owner of the puppy said that if anything happens to the puppy, she doesnâ€™t know what she will do because she was pretty much attached to Fudge, the name of the puppy. This went viral on social media. People were trying to find her in a lot of places, but it wasnâ€™t found.

The owner of Fudge said that she had trained the dog to dislike birds. Thatâ€™s why the little puppy used to bark when birds came to the backyard. Fudge may weigh around 700 grams, and her chances of survival depend on where she had been dropped.

We still donâ€™t know whether the puppy was found or not.

Crows cannot actively kill dogs, but they recognize dogs as one of the predators. A single crow can hardly kill a dog, but it can easily outwit the dog with its beak and talons. In contrast, a dog, particularly a German shepherd, will easily kill or injure a crow.

Not only dogs but other animals much larger than dogs could also be vulnerable to the murder of crows. However, if crows donâ€™t have teeth, their beaks wonâ€™t be intimidating. Keep in mind that an unprovoked attack from crows would be unlikely.

Crows are scavengers, omnivorous, and opportunistic hunters. They can feed on corpses. However, crows are unlikely to eat dogs because they cannot kill dogs. But, if crows find a dead dog on highways, they can feast on it.

How Can You Protect Your Dog From Crow Attack?

When your puppy encounters a black crow, one of the creatures is going to be injured. If you would like to protect your dog from crows, here are some simple but effective tips and tricks you can follow. In this section, weâ€™re going to discuss the best ones.

A murder of crows can attack you and most precisely your small puppy in your backyard if they choose your backyard as their territory. So, you need to identify the spots where crows reside. Once you find one, you and your dog should avoid the place.

2. Distract Them With Their Favorite Treats

To distract crows from your dog, offer them their favorite treats, like unsalted peanuts and dried corn. Wave hello to the crows, toss out a handful of food, and walk away. This might make crows more tolerable to your dog.

If you would like to protect your dog from crow attacks, motion-activated sprinklers could be pretty effective. These devices can expel the crows once they attempt to be close to your dog. Have a look at the Orbit Motion-Activated Sprinkler on Amazon.

4. Divert The Crows With Owl Decoys

In order to divert the crows from your property, you can use owl decoys in your backyard. Purchase owl decoys from pet shops or order them online. In our opinion, the Hausse Fake Horned Owl Scarecrow Decoy from Amazon could be what youâ€™re actually looking for.

If a murder of crows chooses your backyard as their territory, youâ€™ll need to keep your dog indoors during the breeding season. If your dog is a puppy, you should be extra careful about it. Create a nice environment in your house. Toys for dogs from Amazon are recommended.

What To Do If A Crow Attacks Your Dog

Once a murder of crows attacks your puppy, keep it inside your house right away. Distract the crows with some of their favorite treats, like unsalted peanuts and dried corn. Donâ€™t shoot the crows because theyâ€™re protected under the Migratory Bird Treaty Act of 1918.

Always try to be with your pet dog so that crows cannot attempt to attack it. When youâ€™re out of your home, keep your dog inside your house and donâ€™t let it go outside. Donâ€™t attempt to piss the crows off. Otherwise, they will attack you as well.

Crows are good parents like humans. They own many human-like characteristics. Like other birds, they always protect their babies. If we protect our children, weâ€™re called heroes. If crows protect their ones, why are they called villains?

By the way, we hope you have learned a lot about whether crows can attack dogs or not. If your dog has ever been attacked by a murder of crows, how did you protect your dog? Share it with us below in the comment section.