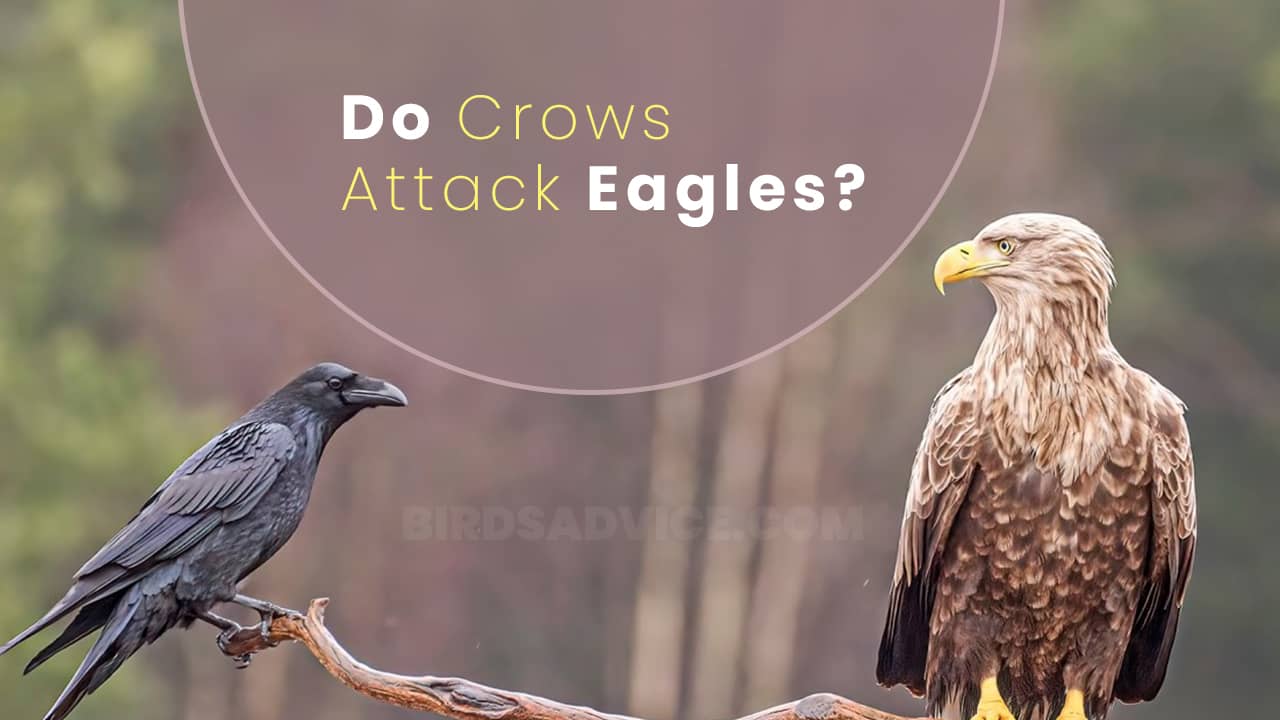 Have you ever watched a little sparrow attack a crow to protect its territory? This often occurs in nature, particularly when smaller birds get death threats from large predators. Maybe, you’ve seen something similar between crows and large predators like eagles.

Contents show
1 Why Do Crows Attack Eagles?
1.1 1. Food Stealing
1.2 2. Nest Defending
1.3 3. Driving Away From A Food Source
1.4 4. Competing For Nesting Sites
2 Why Do Crows Chase Eagles?
3 Do Crows Follow Eagles?
4 Do Crows Attack Eagles In Flight?
5 Why Don’t Eagles Fight Back?
6 Are Eagles Afraid Of Crows?
7 Can Eagles Fly Higher Than Crows To Get Rid Of Them?
8 Can Crows Kill Eagles?
9 Final Words

So, do crows attack eagles? The short answer is yes. A murder of crows attacks an eagle if the eagle attempts to be close to the crow nests, eggs, and chicks. They swarm the eagle from every direction, dragging feathers, pecking hard to draw blood, and dodging it out of the way.

In this article, we’re going to talk in detail about why crows attack eagles and why eagles don’t fight back. Once you finished reading the article, we would recommend you take a look at a couple of articles on whether crows attack cats or dogs.

Why Do Crows Attack Eagles?

You might be wondering eagles are more dominant than crows because crows are much smaller than eagles. But, a murder of crows wildly chases and dive-bombs an eagle in the air. Here are 4 probable reasons why crows attack eagles.

Most probably, crows attack an eagle to steal what the eagle carries away, like dead rats and small squirrels. You may have ever heard crows making alert calls, flying from several directions to dive-bomb the eagle, and harassing it. Typically, one crow tries to distract the eagle, and the others quickly steal the food.

A murder of crows, or simply a crow, can attack an eagle if the eagle attempts to be close to the crow nest in order to harm the eggs, young nestlings, and juvenile fledglings. Since crows belong to a community, all of them come forward to preventing the eagle.

3. Driving Away From A Food Source

Both crows and eagles are scavengers. Once a dead carcass of an animal is on the ground, they will surely be willing to have a feast. But, a murder of crows sometimes doesn’t want to share the treat with the eagles and drive them away from it.

A dogfight would occur between crows and eagles during the early nesting season. Both birds of prey prefer quite similar nesting sites with an abundance of food. Due to the aggressive behavior of crows, eagles can hardly get along with them in the same area.

Why Do Crows Chase Eagles?

Crows chase eagles to protect their nests from probable dangers. Both birds of prey also chase each other up in the air if they try to nest in the same area. A murder of crows doesn’t tolerate an eagle as it can participate in feasting a dead carcass of an animal.

Sometimes, a murder of crows fights an eagle to steal food if their feeding areas overlap. One crow makes the eagle busy fighting back, while others do their job. When both birds of prey find a source of food, crows try to drive the eagle away to get the most quantity.

No, crows don’t follow eagles. They usually mob and harass the eagles by making an attacking flock. Their main objective is to protect their nests, eggs, chicks, and food. Another objective is to drive the eagles away from their territory.

Not only crows, but ravens and magpies also behave like this with eagles. They don’t want to share their food with eagles. Even they don’t allow eagles to build territories in their areas. In other words, crows along with other corvids see eagles as intruders into their territories.

If you would like to know the difference between ravens and crows, read here!

Do Crows Attack Eagles In Flight?

Yes, crows mostly attack eagles in flight. A murder of crows in flight pecks on an eagle from all directions. Sometimes, a single crow rides on an eagle in the air. The eagle gives the crow a free ride and doesn’t fight back.

If an eagle perches on branches and attempts to be close to the crow nest, the parent crow will also attack from above, trying to drive the eagle away from the area. Only when crows are on the ground, eagles can hunt them.

Why Don’t Eagles Fight Back?

The main reason why eagles don’t fight back is they cannot hunt in the air because they don’t have a high degree of maneuverability like falcons. Once a murder of crows attacks them, they steer clear and escape.

Besides, eagles always try to avoid injuries at any cost because every fight can lead them to injuries, especially when they encounter the murder of crows. Once they get injured, they may lose the ability to hunt, and therefore, will die of hunger.

Are Eagles Afraid Of Crows?

No, eagles don’t seem to be afraid of crows. In fact, crows can be intimidating. Eagles just avoid fights to protect themselves from unwanted injuries. They may even give a free ride to a crow without going into a conflict.

For example, imagine if you’re sitting somewhere. A horde of six-year-old children descends on you to torment you. Do you fight back? Absolutely no. You just avoid them. The same thing happens in terms of crows and eagles.

Can Eagles Fly Higher Than Crows To Get Rid Of Them?

Yes, eagles can fly higher than crows to get rid of the crows. Eagles fly up, up, and up with their broad wingspan, leaving the murder of attacking crows behind. As you already know eagles want to get rid of crows to avoid a battle, which may lead them to injuries.

Now, you might be wondering why people use the expression “as the crow flies” but not “as the eagle flies”. The “as the crow flies” refers to distance, not high altitude. Besides, some people believe that eagles can fly above the clouds, but it’s not true.

Crows cannot kill eagles, but they can mob, dive-bomb, loud-squawk, and defecate the eagles while flying in the air or perching on tree branches. On the other hand, an eagle can kill a crow in a one-on-one battle, suddenly grabbing the crow with its talons.

In a nutshell, crows can attack eagles if the eagles are trying to be close to the crow nests, eggs, and chicks. A murder of crows usually fights an eagle in the air, but the eagle is willing to avoid the fight in order to avoid any unwanted injury.