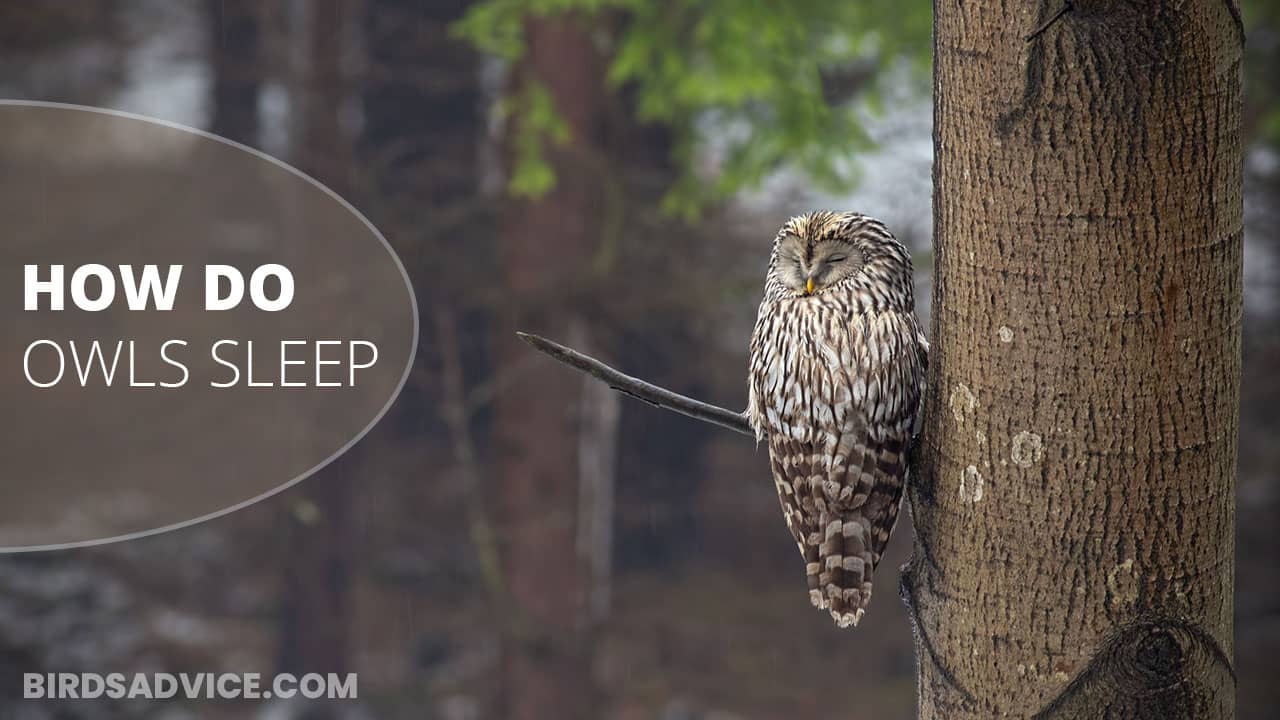 Owls always attract humans with their spooky yet lovable physical characteristics and mysterious behaviors. But, among several peculiar behaviors of these intriguing birds, what captures most human eyes is how they enjoy slumber. Yeah, pretty distinct and strange!

Contents show
1 Where Do Owls Sleep?
2 Do Owls Sleep in Upright Position?
3 How Do Owlets Sleep?
4 Why Don’t Owls Sleep at Night & How Long Do They Sleep?
5 Do Owls Go into Torpor State and Why?
6 What is REP in Owls?
7 Do Owls Always Take Naps in the Same Place?
8 Wrapping Up

So, how do owls sleep? These enigmatic birds have different sleeping patterns than humans and mammals. Usually, they take a nap facing downward, and sometimes, they turn their massive heads backward for a comfortable sleep in some different places. They follow this sleep pattern due to having a heavy head.

However, these reclusive birds exhibit several other strange deportments, such as their sleeping duration, places, etc. In this article, we have covered everything regarding owls’ naps. Hence, without wasting any more of your precious time, let’s get straight into these facts.

Where Do Owls Sleep?

All owls of nearly 250 species tend to slumber on the tree branches. Apart from that, these nocturnal animals sleep in hollow trees, abandoned buildings, chimneys, fractures, and similar places. They choose these sites to snooze to avoid disturbances caused by humans and animals.

Although they build nests for habitational purposes, they don’t take a nap inside the nests, don’t even during the breeding season. Another interesting fact is that they don’t build their own nests; instead of manufacturing, they choose to snatch hawks, falcons, eagles, or other animal nests.

And they prefer nesting indoors rather than outdoors and love to sleep alone near the nests.

Do Owls Sleep in Upright Position?

Yes, these nocturnal creatures sleep in the upright position. However, unlike other birds and mammals, they opt for this distinct sleeping pattern because they have comparatively larger and heavier heads than other animals, according to their head to bodyweight ratio.

In addition, their large facial discs make them sleep in this awkward position.

How Do Owlets Sleep?

While adult owls take a nap in the upright position, their owlets choose to lie down entirely to get a restful sleep. Like the full-grown owls, baby owls also boast massive facial disks. Unfortunately, they don’t have enough strength to keep their vast heads upright during sleep.

Consequently, these nocturnal baby creatures need to place their faces downward for sleeping. Some people often get scared off by noticing these owlets’ sleeping posture; they assume these birds are dead.

While in reality, they are just taking a restful nap, another surprising fact to talk about is that they don’t fall off trees even after lying down completely. Why? Because their hallux (back toe) grips the branches of trees tightly and prevents them from falling on the ground. That’s all about how baby owls sleep.

Why Don’t Owls Sleep at Night & How Long Do They Sleep?

Owls are nocturnal animals, and you may not know that they are family members of the avian group. And thus, their metabolism rate is comparatively higher than that of other animals, making them hunting predators. That’s why they wake up all night long to hunt their prey, and they sleep during the entire day.

According to research, all birds require at least twelve hours of sleep to function their bodies properly. And owls also maintain this rule of thumb for their survival. However, in some cases, they are seen to extend their sleeping time to up to seventeen hours. We will talk about this fact in the upcoming question.

Do Owls Go into Torpor State and Why?

Yes, depending on the situation, owls use a torpor state. It’s a phase that requires owls to lower their body temperature and metabolic rate to cope with adverse environments. And owls choose to go into the torpor state during winter because of food shortages.

They tend to sleep for around seventeen to even twenty-four hours during this time. Anyway, some people make a mistake by addressing this condition as hibernation when it’s not. Hibernation is an advanced state where animals lower their body temperature to a minimum rate and extend their sleeping time over twenty-four hours, and owls don’t use hibernation.

What is REP in Owls?

The term REP refers to rapid eye movement, which indicates the lightest state of sleep. More specifically, it means the movement of your irises right after you fall asleep. Researchers have found this sleeping pattern in owlets, baby mammals, and even human babies.

They are recorded to spend the same amount of time in a condition, whereas neither are they in a deep sleep nor are they awake. This state of sleeping is called the awake-like phase. And with time, this REM sleep pattern starts to decrease drastically as owls and other mentioned creatures age.

Do Owls Always Take Naps in the Same Place?

Although most owls prefer sleeping in the same resting place alone, some like to share their sleeping area with others. They roost communally. After spending evening and night hunting, they fly to the resting place of their chosen pair. So, these are all facts regarding owls’ sleeping patterns, where they sleep, etc.

These are all facts regarding sleeping and other strange, mysterious, and spooky behaviors of wise-looking, nocturnal and reclusive birds called owls. In this article, we tried to describe everything to the point and bring out the most valuable and trustworthy factors you can entirely rely on.

Thus, we hope this article will significantly enhance your always-growing knowledge about these birds. If it does, we will be glad to see you coming back and reading our resourceful articles. Keep in touch with us on Facebook, Pinterest, and Twitter.