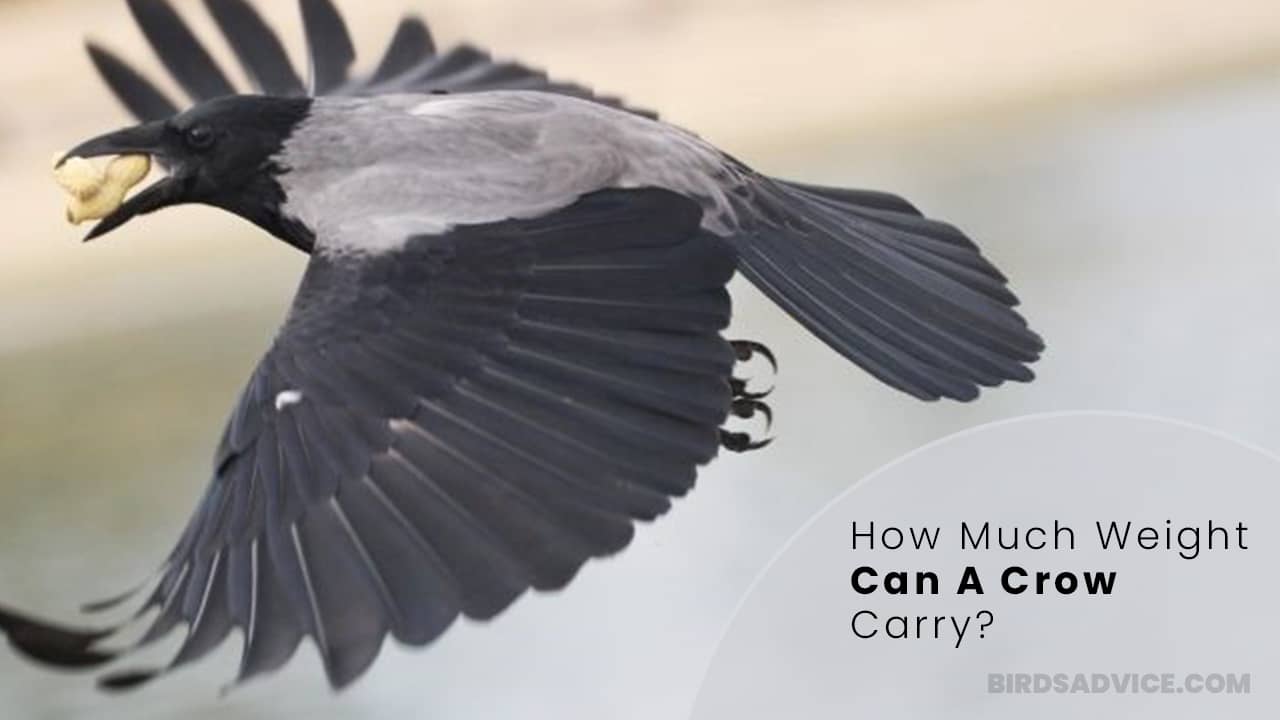 One afternoon, I was walking carelessly in my backyard. Suddenly, I saw a crow carrying off a pizza slice after several attempts. The crow wasn’t flying far or high. It just needed to take the slice behind a large tree in order to have a little privacy. This arises a question in my mind:

How much weight can a crow carry? An adult crow can usually carry anything weighing 0.3 lbs. (4.8 oz.). Since a pizza slice weighs around 0.3 oz., and the crow can carry it after several attempts, crows may not be able to lift anything heavier than this (according to my experience).

Apart from that, a few more questions may come into your mind; for example, how crows carry anything, can they use beaks or claws to carry, do they use any tools, and how they judge the weight of something. Here is another article for you: Crows Vs. Ravens.

Read Also: How To Help A Crow That Can’t Fly? [Details here]

How Do Crows Carry Anything?

Like other creatures, crows use their beaks to carry as much food as possible. The amount of food depends on the size of their mouth. They usually seek out seeds, worms, and even small mammals, like frogs, mice, and small rabbits.

During breeding seasons, crows carry most of the offered food by humans to their chicks. Since crows are quite intelligent, many people believe that crows know which food is the best and the most nutritious for their babies.

Can Crows Carry Anything with Their Claws?

Now, you might be wondering what claws are. Claws are curved, pointed nails on the legs of an animal. Crows usually have 8 claws. Their claws are not typically called talons because the term is most commonly associated with raptors.

Do Crows Use Tools While Carrying?

Crows could use tools to carry objects. New Caledonian crows move two things together, inserting sticks into objects and then transporting both at once. You will never see this unique behavior in non-humans.

Crows can move anything out of the hole of a large wooden tree by inserting a thin stick. Once succeeded, use the stick to transport the object. Furthermore, I don’t know whether crows use tools this way or not in the wild.

How Do Crows Judge The Weight?

As we already know, crows are intelligent. They can judge the weight of something as humans do. Crows infer the weight of an object, whether it’s heavy or lightweight, by looking at the way it moves in a breeze. They’re the first non-human animals with this ability.

For example, imagine if a crow sees a cardboard box blowing down the street in a breeze. The bird notices another box stationary despite a heavy wind. As a result, the crow can easily infer which box is lightweight and which one is heavier.

How Much Weight Can A Raven Carry?

Ravens can carry up to 1.5 lbs. in flight. Since they’re bigger and stronger than crows, they can carry more weight than what crows carry (almost 3 times more). Just like crows, ravens use their beaks to carry anything from one place to another.

Similar to crows, ravens are the brightest in the avian world. They have unique behavior, carrying objects in their mouth in order to attract their mates. This deictic gesture brings both male and female ravens closer.

However, we hope you have learned a lot about how much weight a crow can carry. If you have ever seen a crow carrying something with its beaks, what was it carrying? Share it below in the comment section.