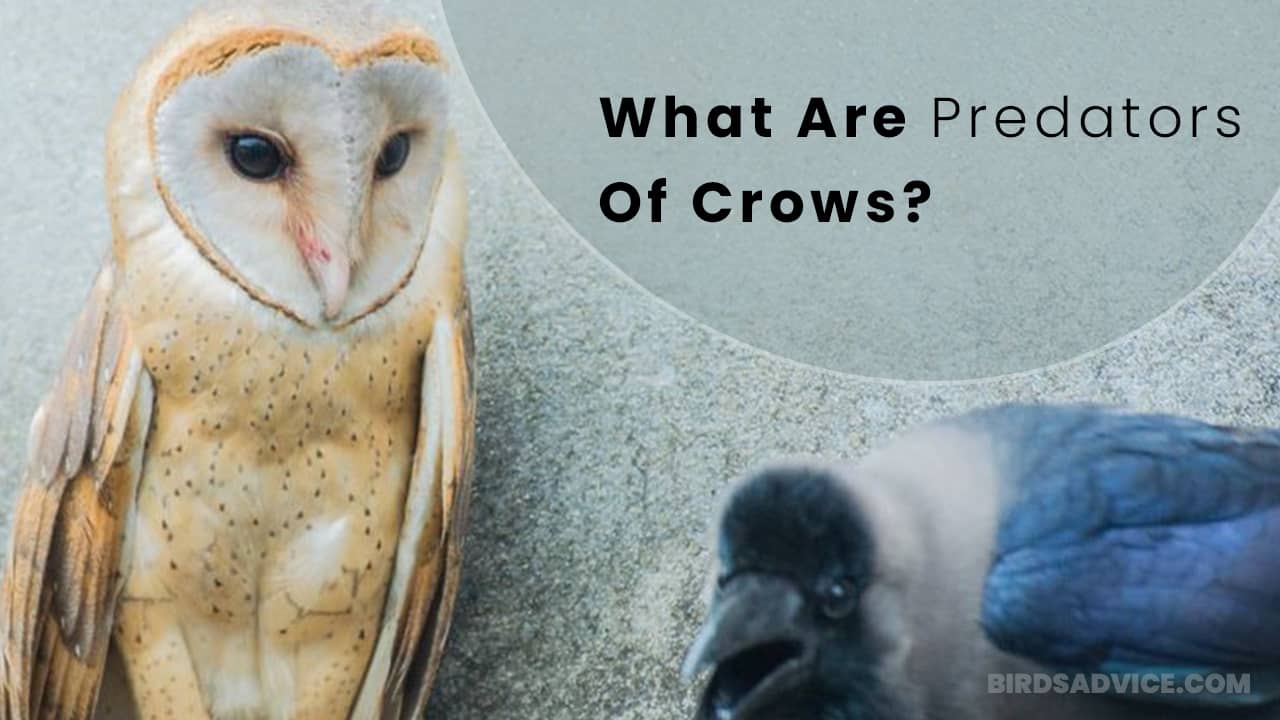 Did you know crows are both prey and predators? As predators, a murder of crows can mob and dive-bomb hawks and eagles. These birds can also kill the nestlings of songbirds and even their adults. Besides, they can crack and eat other birds’ eggs.

So, when crows are prey, what are predators of crows? The main predators of crows are eagles, hawks, owls, and any tree-climbing snakes. In mammals, human hunters, raccoons, squirrels, opossums, cats, dogs, and sometimes foxes can be the natural enemies of adult crows. They might even be mobbed by kingbirds, red-winged blackbirds, grackles, and blue jays.

In this article, we’re going to talk about what the predators of crows are, particularly in birds and mammals. Once you finish reading this article, we would recommend you read our article on fighting between crows and eagles.

A List of Natural Predators of Crows: At A Glance

What Birds Are Predators of Crows?

In the avian world, hawks, eagles, falcons, great horned owls, and ravens are the main predators of crows. Apart from that, kingbirds, red-winged blackbirds, grackles, and blue jays can sometimes mob a crow. Let’s see how these birds attack crows.

One of the crows’ natural enemies, hawks often attack crows during the day. These raptors mostly attack young crows, particularly nestlings and fledglings. This is why very few young crows reach adulthood.

Bald eagles are one of the natural predators of crows. These raptors attack crows, particularly when crows are not in their flock and stay on the ground. This is because crows in flight are stronger than eagles.

Owls, especially great horned owls, can kill both young and adult crows when the crows roost in flocks during nighttime. Hidden in evergreen trees, owls suddenly come after the crows. They love to eat the brains of crows.

In a one-on-one battle, a crow doesn’t win over a raven because crows are almost half the size of ravens. In North America, ravens are predators of crows. If they get the chance, they can crack and eat crows’ eggs.

Kingbirds sometimes mob crows, swooping down and perching the crows to drive them away from kingbirds’ breeding territory or their food sources. They even mob the crows to protect themselves and their young.

Have you ever seen little attacks big? Grackles can attack crows. Crows are likely to eat grackles’ eggs and chicks. Long before a crow finds a grackle’s nest, the grackles make a gang and mob the crow. Once attacked, the crow leaves the area.

Did you know blue jays belong to the Corvid family? Blue jays may attack crows or vice versa. Both birds are omnivores and known to steal and eat other birds’ eggs. To drive one away from the food source, they fight each other.

What Mammals Are Predators of Crows?

In mammals, raccoons, cats, squirrels, opossums, dogs, and sometimes foxes are the predators of crows. Both adult and young crows are subject to these predators. Some of them even eat crows’ eggs. Let’s see how they attack crows.

Raccoons are one of the mammal predators of crows. They can attack, kill, and eat crows, especially the young ones: nestlings and fledglings. When parent crows are not present in their nests, raccoons are likely to go and steal crow’s eggs.

In North America, a wide variety of cats, including bobcats, domestic cats, and feral cats, are the predators of crows. A murder of crows can counterattack the cats. To know more about the fight between crows and cats, Click Here!

Squirrels are likely to attack crows, particularly young crows and their eggs. They don’t win over adult crows in a fight. A murder of crows can kill a squirrel and eat it because it’s not unheard of that crows kill small animals.

Just like squirrels, opossums are likely to prey on young crows and their unhatched eggs. If opossums get a chance, they eat the eggs. However, these small animals can be mobbed by a large flock of crows and got killed.

You may ever have heard that a fox has caught and eaten a crow. However, it’s pretty uncommon. By the way, if foxes get a chance, they can prey on on-the-ground crows, their nestlings, and unhatched eggs.

Crows consider dogs as predators if the dogs are close to their nests, fledglings, and eggs. In a battle between crows and dogs, crows become the winner most of the time. However, you may have seen a dog carry a dead crow in his mouth.

Do Crows Counterattack Their Predators?

Yes, crows always counterattack their predators. In the daylight, crows are a threat to hawks, eagles, falcons, and ravens. Crows know there is strength in numbers. That’s why much larger predators always try to avoid being pecked.

When a predator is nearby, crows call dozens of crows to join the battle. They make different calls for raptors and mammals. Besides, crows even mob owls if located during the day, swooping down and harassing them.

Almost all predators are likely to eat crows’ eggs. In particular, hawks, great horned owls, raccoons, opossums, and all tree-climbing snakes eat crows’ eggs if they get the opportunity to be close to the crow nests.

Other small birds and animals, like kingbirds, red-winged blackbirds, grackles, blue jays, cats, and dogs, are not likely to eat crows’ eggs. They just drive the crows away to protect themselves and their nestlings.

On the other hand, ravens, kingbirds, red-winged blackbirds, grackles, blue jays, raccoons, and cats don’t eat dead crows. However, dogs can carry dead crows away in their month. We don’t know whether they eat the dead crows or not.

What Predators Are Crows Afraid Of?

Crows are mostly afraid of great horned owls and snakes because they attack crows, their nestlings, and eggs during nighttime. For your information, crows don’t see anything at night. That’s why they’re afraid of these nightly predators.

On the other hand, other predators, like raptors and mammals don’t usually attack crows at night, but during the crow. Meanwhile, crows make a large flock, called a murder, and counterattack the predator. So, crows are not afraid of daytime predators.

The predators of crows are some raptors and mammals, a few small birds, tree-climbing reptiles. If a predator approaches crows at night, they’re much more vulnerable, particularly young crows and unhatched eggs. During the day, crows counterattack the predator.

However, we hope you have learned a lot about the predators of crows. If we have missed a predator in this article, let us know below in the comment section. Have you ever witnessed a battle between crows and one of their predators?