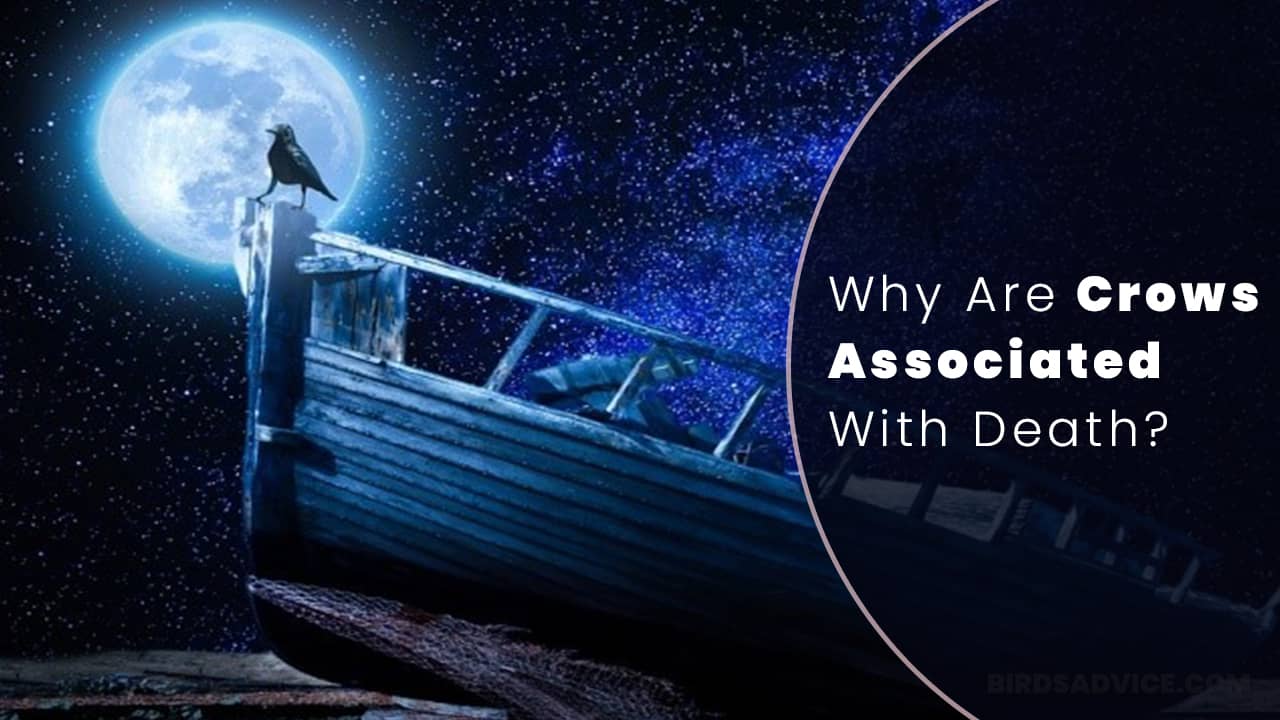 Crows are one of the most intelligent birds in the world. We all read the story ‘The Thirsty Crow’ that justifies how smart crows are. Regardless of their intelligence and smartness, they’re very social and caring. Even they can mourn over their dead ones.

Contents show
1 Reasons Why Crows Are Linked To Death
1.1 1. A Group Of Crows Is Called A ‘MURDER’
1.2 2. Crows Are Scavengers
1.3 3. Black Is The Sign Of Death And Darkness
1.4 4. Plague Doctors Used To Wear Crow-Like Masks
1.5 5. Crows Mourn Their Dead
1.6 6. Crows Can Be Aggressive to Humans
1.7 7. Crows Can Kill Little Birds
2 What Are the Superstitions That Associate Crows With Death?
3 Final Words

So, why are crows associated with death? Many people consider crows as an omen of death because they’re scavengers and usually found with dead bodies. These birds can also be aggressive to humans. Most importantly, they’re thought to follow animals or people expected to die soon.

There are a wide variety of reasons why people associate crows with death. In this article, we’re going to talk about all that. Here is another article for you on whether crows can sense death or not. Once the article is finished, we suggest reading that one.

Related Blog: What Does It Mean When Crows Gather Around Your House? [Read now]

Reasons Why Crows Are Linked To Death

Here are 7 reasons we have found so far why crows are linked to death.

1. A Group Of Crows Is Called A ‘MURDER’

Since a group of crows is called a murder, people are probably associating crows with death. It’s thought that many crows gather and decide the capital fate of other crows. In our opinion, this is just a superstition that spreads rapidly among the uneducated.

Another reason could be that people give very pretentious names to the groups of animals, such as a parliament of owls, an ostentation of peacocks, a skulk of foxes, a knot of frogs, etc. To associate crows with death, they may have given the name to the group of crows.

Even though crows can feed on anything, they’re mainly scavengers, meaning they eat roadkills, corpses and the carrions of dead animals, including insects, snakes, and frogs. Therefore, crows are often associated with death.

When a black crow finds a dead animal, the entire group finds it. Not only crows, but ravens can also eat rotting bodies and their parts. Vultures come and participate in the feast of the rotting corpse with crows and ravens.

Crows are black that often signifies death. For example, it’s a custom to wear all black at funerals. We also tend to associate black with darkness. You may have noticed that the evil villains in stories are usually dressed in black.

In history, black was considered as a sign of death. Once upon a time in Great Britain, Queen Victoria made the entire nation dark and sad for years by making everything black after her husband died. Every person had to wear black dresses to express mourning.

In the age of the black plague, plague doctors used to wear crow-like masks holding potpourri and roses to avoid the smell of the dead. Since crows look similar to what plague doctors looked like, this is one of the reasons why crows are associated with death.

In those days, it was believed that the crow-like masks of the plague doctors could scare away the demons that caused the plague. However, we’re not sure if this is believed or not. You may find some people who still believe this. But, we think it’s just a superstition.

Unlike most other birds, crows make unpleasant, screeching sounds that make us shiver and invoke disgust in us. When a crow dies, a murder of crows harshly sounds loudly around the dead body, looking like they’re mourning. This could be another reason to link them to death.

Typically, crows make different types of calls. When chasing predators that disturb their nests, they make deep, rasping calls. Besides, the caws of crows signal friendly presence or warn their peers of any imminent danger.

6. Crows Can Be Aggressive to Humans

Crows are extremely territorial during their breeding season. They can be aggressive to you if you try to be close to their nests during this period. They can dive and strike you not just once but again and again until you move a good distance away from their nests.

If you encounter this type of situation, what can you do to protect yourself? Protect your head by running far away from crows’ territory. Crows can remember your face for up to 3 years and let other crows know about you. Be cautious!

Since crows sometimes kill little songbirds, they’re linked to death. In addition to killing, crows eat eggs, nestlings, and even adults of other little songbirds if they get the opportunity. In this case, sparrows are vulnerable to crows.

What Are the Superstitions That Associate Crows With Death?

Now that you know why crows are associated with death, hopefully, you can keep yourself away from superstitions. You should believe that seeing several crows together doesn’t mean anything. Even you’re not going to die for crows.

However, we hope you have learned a lot about why crows are always linked to death. If you have any bad experiences after seeing multiple crows, you can share them with us. We’ll try to find out any scientific explanation of your incident.