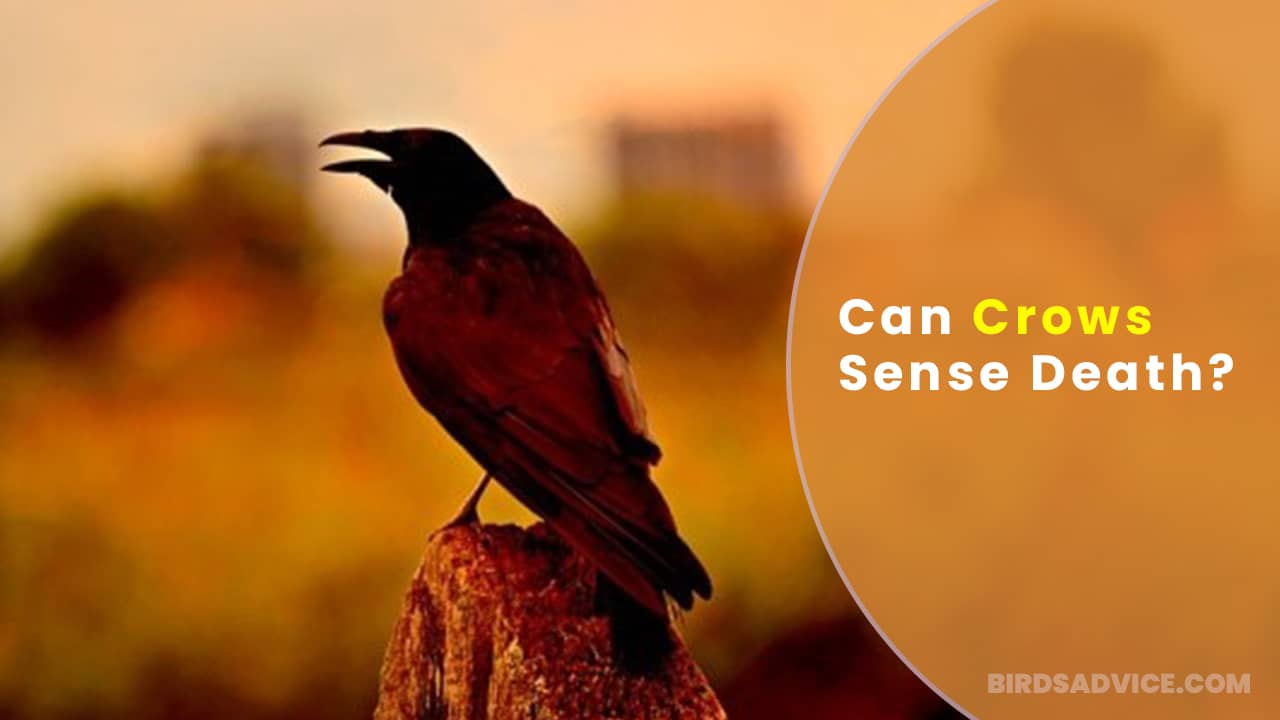 Crows are thoughtful birds that can solve complex problems, like holding a grudge, recognizing human faces, and more. They’re capable of group decision-making and even gathering once a crow dies, looking like they’re mourning and giving the dead bird a funeral.

Now, the question is, “Can crows sense death?” Crows cannot sense death but do know by observing every move a sick or hurt animal makes. They become very patient to track a weak animal until it collapses. Finally, dinner time comes!

Apart from that, many people relate crows to death and believe that crows know when a human being dies. Sounds realistic! In this article, we’re going to discuss all that very clearly. Here is another article for you on whether crows can swim or not.

No, crows cannot sense human death. But, since they’re very smart birds, they can sense where a battle or war is likely to take place. Many people tell that they notice a murder of crows when someone beloved is going to die. What does this mean?

Humans have flexible brains that always grope for meaning. For example, the death of one of your Uncles doesn’t call crows and arrange tea leaves. If he died of Coronavirus, and then you see multiple crows perching on a fence, it won’t mean anything significant.

If you think that crows can provide supernatural messages, you may interpret them as harbingers of death. However, you may find some people who consider crows as flexibility, intelligence, or even destiny. But, the fact is crows don’t have any supernatural power.

Why Do Crows Come When Someone Dies?

As a matter of fact, there is no direct relationship between someone’s death and crows’ arrival. When this happens, it must be considered as just a coincidence. Maybe, crows choose the place to rest, spot some food nearby, or be grounded by high winds.

A long time ago, human corpses were not buried after death. Then, it was often seen that crows were feasting on the bodies. Besides, people, in many cultures, believe crows take the departed soul to another world. In reality, it’s just a murder of crows, nothing else.

Yes, crows can smell death because they’re carrion-eating birds, like ravens, vultures, and eagles. Once crows smell a corpse, they gather around it to feast on it with their pronounced, sharpish beaks. They will even eat our dead bodies if they get the chance.

When it comes to their dead, crows can smell it and find out the right spot from distance. After that, they gather around it, squawk loudly, and pay attention to the fallen comrade. They mourn, give a farewell to it, and later investigate who is the killer.

That crows can sense death is a misconception that has been spread all over the world with time. Keep in mind that they’re not harbingers of death nor related to destiny. They’re one of the carrion-eating birds, waiting for an opportunity.

Anyway, we hope you have learned a lot about whether crows can predict death or not. If you have any experience like someone was going to die and there were plenty of crows out there around your house, you can share it with us below in the comment section.