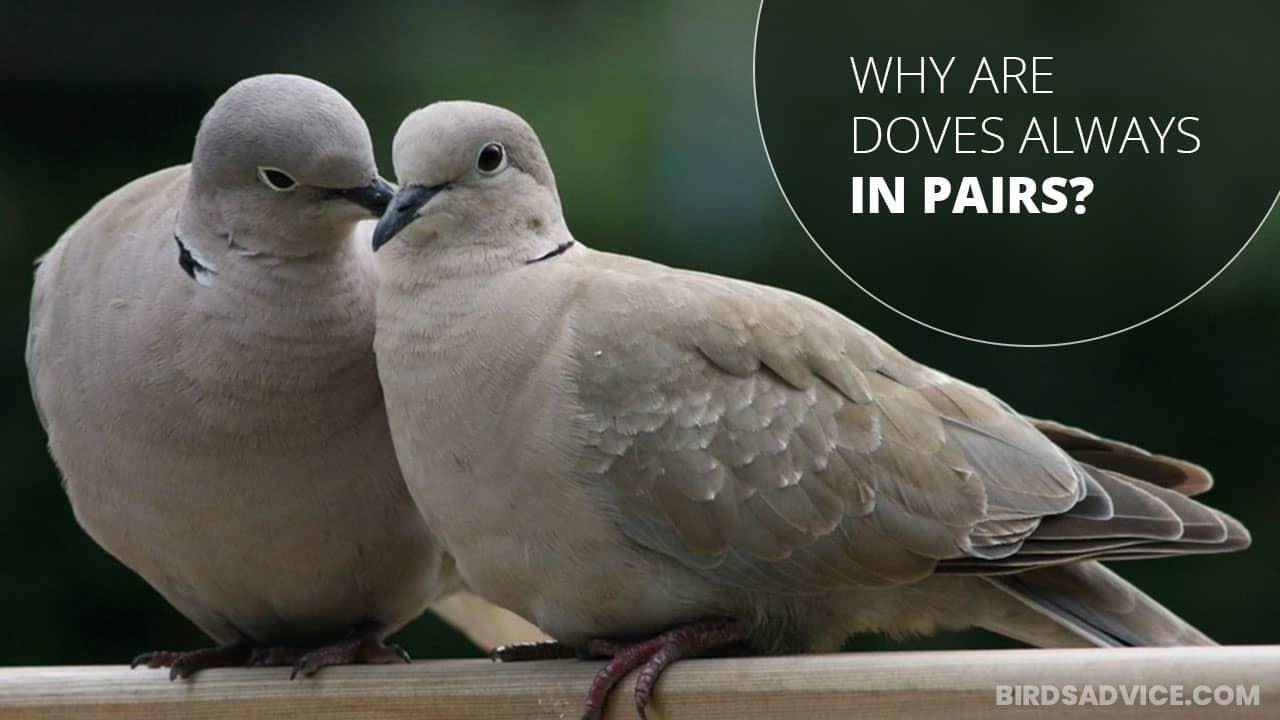 Doves are loved by numerous bird lovers all over the world. These feathered creatures possess different enchanting characteristics. Among their behavior, what attracts most is their pairing nature.

Contents show
1 Do Doves Mate For Life?
2 How Do Doves Mate?
3 Does A Dove Only Have One Mate?
4 What Happens When A Dove Loses Its Mate?
5 Do Doves Cry When Their Mates Die?
6 Can A Pigeon & A Dove Mate?
7 Do Doves Sleep In Pairs?
8 Wrapping Up

Many birders wonder, why are doves always in pairs? Doves are monogamous by nature; they tend to spend their entire lifespan with one partner. Yeah, these birds are loyal and represent true love. But, while most doves prefer mating for life, some choose to pair up only in the mating season.

In contrast, when one partner passes away, the other one is very much aware of the loss and mourns the death of its pair. We can say that they’re gifted with many human-like behaviors. Let’s explore some other factors below.

Do Doves Mate For Life?

Yes, most doves mate for life. But some doves only pair up during the breeding season. And researchers believe such doves are the ones who lose their mates early. Doves of this type mourn the loss of their partner.

Apart from that, doves are monogamous. You might have noticed that mating dove pairs often cuddle each other. They love their company and never leave each other until they die.

How Do Doves Mate?

Doves have a cute courtship ritual that they perform during the mating season. At that time, primarily male doves start flapping their wings in the air noisily.

After choosing a potential mate, male doves bow, pump their heads, and yield the cooing sound to attract female doves. They also preen and nibble their mate’s head and neck before mating.

After receiving the signal, the male dove perches on top of the female dove, and the female dove crouches to provide the male with more effortless balance. At this moment, both doves face the same direction.

And to help the male dove copulate comfortably, the female dove moves her tail aside and exposes her cloaca.

Afterward, male doves begin touching and rubbing the female dove’s cloaca with his. Their copulation period remains less than a second, so it’s called the cloacal kiss. That’s it, they’re done, and mating is complete.

Does A Dove Only Have One Mate?

Approximately 90% of bird species are monogamous, and doves fall in this category too. Doves prefer pairing with a particular mate for a lifetime.

However, there are exceptions; some doves choose to mate only during the breeding season. That being said, doves tend to have one mate in their lifetime.

What Happens When A Dove Loses Its Mate?

A dove typically mourns the death of its mate. They’re known for watching over and taking care of their deceased pairs.

After losing their mates, they often visit the places where they lose their pairs. Yes, they feel the loss and eventually move on and find new pairs.

Do Doves Cry When Their Mates Die?

Although doves make a life-long strong bond with their partners, they don’t cry like us; instead, they mourn for their mates.

Some avian experts found that doves watch over their deceased partners and take good care of them. Some doves even return to where they lost their partners; perhaps, they may recall memories.

Can A Pigeon & A Dove Mate?

Pigeons and doves won’t mate or breed in normal situations, but they can undoubtedly mate up if left with no option.

However, they can mate. Many researchers have discovered hybrid versions of doves just by making pigeons and doves mate in the breeding cages.

Do Doves Sleep In Pairs?

After pairing up for the breeding season, male and female doves decide to stick together and perform every chore, from roosting at night to incubating their nestlings together.

That said, doves often sleep with their mates. These monogamous birds court each other and build and assemble their nests together; in essence, they choose to perform everything together.

Doves opt for a different sleeping pattern than other birds. While taking a nap, they keep their heads between their shoulders, close to their bodies, rather than tucking their heads under the shoulder feathers.

That’s all about why doves always love to stay in pairs. For their personalities, they’re recognized as the symbol of peace and love. In some cultures, they’re symbols of love, purity, peace, and hope.