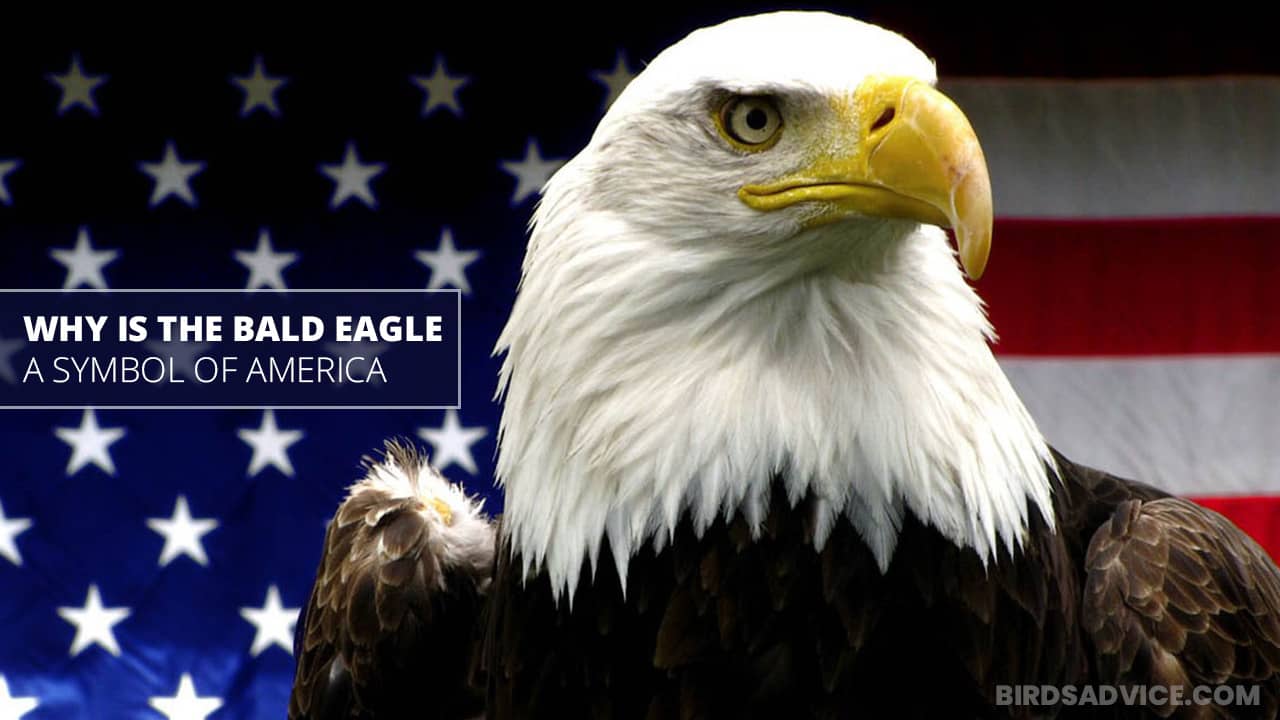 The United States of America boasts many national symbols. But among these symbols, what signifies the nation’s spirit most is the American Bald Eagle. You can find images of this iconic bird everywhere, from coins, paper currency, to even passports and the president’s official seals.

But have you ever wondered, “why is the Bald Eagle a symbol of America?” Why is this bird so important to Americans?

Bald Eagles have long been associated with authority and sovereignty; thus, the mighty bird was chosen by the United States as a symbol of America. The Romanian nation has used this bird of prey to symbolize dignity, statehood, and governmental power for thousands of years.

Following Romanian’s path, our president John F Kennedy had said that our founding fathers had made an appropriate choice by choosing the bald Eagle as the nation’s emblem. This bird aptly embodies America’s strength and freedom with its fierce beauty and proud independence, he added.

Since that period, the Bald Eagle has become a symbol of America to make us feel a strong sense of pride and honor in our country. Now, let’s talk about other significant facts related to this American symbol in this article.

You Can Read: Why Are Owls Considered Wise? Read here

Who Selected The American Bald Eagle As A National Emblem?

The Second Continental Congress chose the American Bald Eagle as a national emblem, and the authority thought it would represent the nation as its good emblem.

Eventually, the Bald Eagle was selected as the American symbol through voting by a significant number of the Second Continental Congress’s members.

When Was The American Bald Eagle Proposed As A Symbol Of America?

Several years after our country had declared its independence on July 4, 1776, the Bald Eagle was chosen as a symbol of America in 1782. Then the Continental Congress appointed Benjamin Franklin, Thomas, and John Adams to design America’s official seal.

Unfortunately, their design was not satisfactory. Then, in 1782, Charles Thomson got all the works of those three committees. He improvised all the designs and came up with the American Bald Eagle Design, which instantly got the Second Continental Congress’s approval.

Afterward, the American Eagle was placed on the seal of our country. It Appeared on the one-dollar bill, president’s flag, U.S coins, and military insignia.

Why Did The Authority Choose The Bald Eagle As A Symbol Of America?

Well, eagles have always been known for their courage, strength, freedom, vision, divinity, renewed life, direction, and immortality for generations. Keeping these factors in mind, the Second Continental Congress chose the American Bald Eagle as the national symbol.

The authority also thought that the Eagle was the only native bird residing in North America. This fact helped the authority to make the decision fast.

Anyway, for your information, aside from being a symbol of strength, power, and dignity, the Bald Eagle holds a long story within the Americas. Many native Americans incorporated this mighty bird in various stories, symbols, and rituals.

Some even used eagles’ tail feathers as a prize; they almost used eagle symbols in everything from jewelry to headdresses. In short, they loved and were obsessed with this bird.

Although Americans love this bird, very few Americans know all the significant factors regarding this bird species.

If you also belong to the most American group, who know very little about eagles, we recommend you keep reading this article. Below we have shared a few interesting facts about the Bald Eagle.

Like other predator birds, Bald Eagles are solitary yet mate for life. As soon as the male finds his mate, he builds a nest and stays with her. After pairing up, the female Eagle stays in the nest while the male one does hunting and other food-arranging chores.

2. They Lead A Long Life

Bald Eagles live comparatively longer than most birdies. Most eagles can live more than two decades, and some even can live beyond thirty years.

Bald Eagles live in massive nests. Their nests are usually two to four feet deep and have a width of about four to five feet. And the best fact about their nest is that it tends to weigh around or more than hundreds of pounds.

Besides conducting a high-speed soar in the sky, Bald Eagles can also glide in the water. But they don’t use this skill without any purpose; they only perform swimming when they can’t pluck out a large fish out of water. At that time, they drag their prey to the shore.

Indeed, bald eagles aren’t named because of being bald. But when young, their feathers turn white, making them look bald, which is why people call them bald eagles.

Bald eagles are large, strong, fearless, tenacious, pose vitality, and remain in the top position on the food chain. Because of these virtues, they get honored by placing their images on various things.