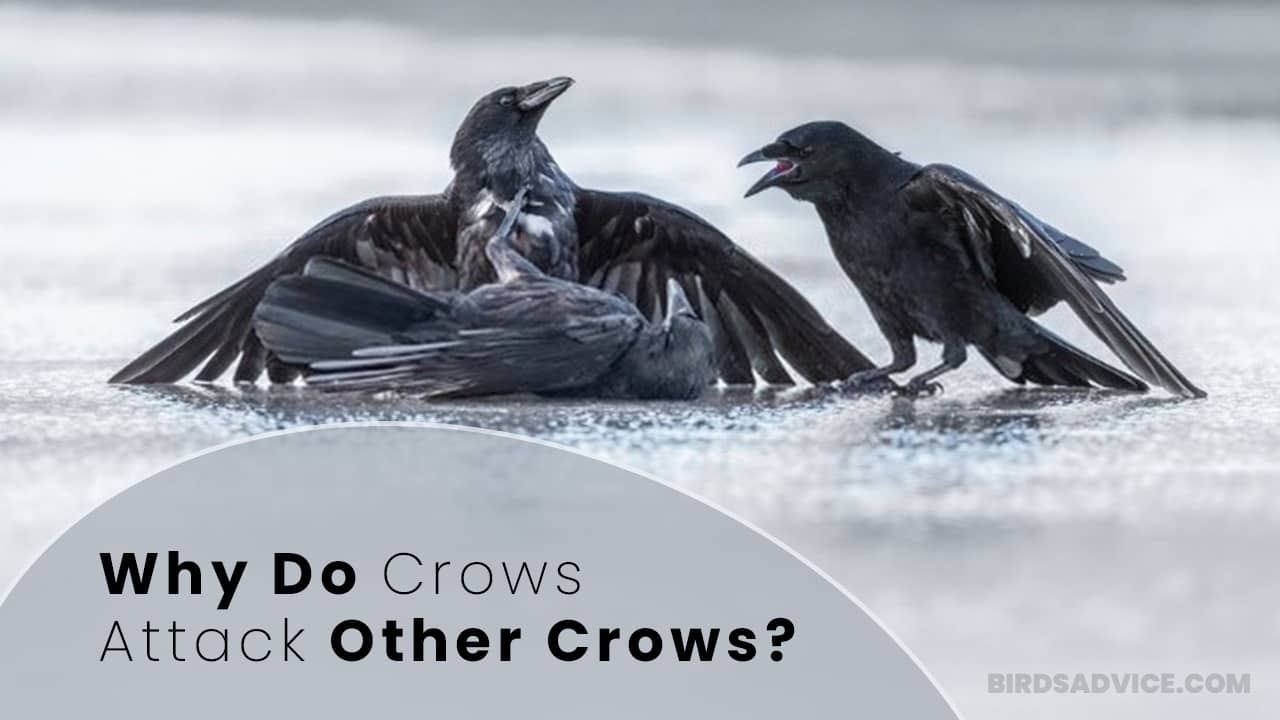 Imagine if you’re driving on highways. Suddenly, you notice a couple of crows falling out of the sky, tangling up around each other. One attacks the other and already pecks out one eye. Meanwhile, a murder of crows comes to attack the injured crow as well, diving in next to it, peck it, and then flying off.

This may lead you to wonder, why do crows attack other crows? Crows attack other crows to defend mates, compete with each other for food, and drive the outsiders away, who cross the territorial boundaries. However, playful fights and spats might often occur among themselves in the same family.

Related Blog: What Are Predators Of Crows? [Details here]

Why Do Crows Attack Each Other?

Typically, crows fight with other crows both inside and outside of their family groups. They seem to be xenophobic, which means they don’t tolerate crows from other family groups. Here are some probable reasons why crows attack each other.

In most cases, crows attack other crows to defend their mates. If an outsider male crow threatens the mate or tries to mate with the female crow, the male crow in the pair attacks the outsider, diving on it and pecking it until it leaves the area.

#2. Preventing from the Territory

Crows are highly social and much territorial to other crows, always trying to protect their family from stranger crows. So, they hardly welcome strangers in their territorial boundaries. In fact, they recognize who the outsider is and who belongs to the family really well.

The territorial behavior of crows is not always about taking care of family members. A deadly fight might occur among crows when they discover a valuable food source. Once a crow tries to take the food, others chase the crow. Finally, the winner gets the food.

Despite being aggressive, crows can be playful and enthusiastic. Like humans, crows have families, including parents and offspring. Sometimes, they can playfully fight each other within their family. The fights are not usually serious and long-lasting.

How Do Crows Attack Other Crows?

Mobbing a single crow by a murder of crows is a mystery. If such an incident happens in front of you, it might seem to be a coupling with a flock of crows, diving one after another. The aerodynamics may include:

Sick or injured crows are subjected to mobbing because they might attract predators, eagles, hawks, falcons, owls, snakes, raccoons, large dogs, etc., to their territory. The predators might be a great threat to the whole flock.

Once a murder of crows knows that a crow is sick, injured, or acts strangely, they chase, attack, harass, and even kill the crow to prevent the arrival of the predators in their territory. The crows mob the injured one as long as it dies, pecking the eyes inhumanely.

Do Crows Kill Other Crows?

Yes, crows sometimes kill other crows. If a fight between a couple of crows ends up deadly, one of the crows might get killed. Maybe, the loser is much weaker than the winner or misjudged and accidentally killed.

Crows are complicated and competitive. In order to survive, they need to kill others. This may remind you of that famous phrase, ‘survival of the fittest’ first introduced in the Principles of Biology by Herbert Spencer.

Why Do Crows Kill Other Crows?

Basically, a couple of reasons are out there why crows kill other crows. The first one is territory transgressions, meaning if a crow crosses the territorial boundary during a mating or breeding season, it may get attacked by the pair.

The second one is killing injured, sick, or juvenile crows to reduce predation and competition. Although this looks so entirely unfair, crows need to do it in order to protect the other members of the family.

Why Do Crows Attack Ravens And Vice-Versa?

Crows are the main nest predators of ravens. They mainly attack ravens for food and territory even though they’re much smaller than ravens. Apparently, crows are much more aggressive towards ravens between March and May (crow’s nesting season).

However, they can also attack each other in other seasons, but the intensity of their fights decreases. The battles between crows and ravens are mostly one-on-one contests. Since crows live in flocks, they dominate ravens that usually live in pairs.

Not only crows but other animals and birds, such as squirrels, brown bears, lions, primates, dolphins, tree swallows, and cliff swallows, can attack each other. So, you shouldn’t blame crows for attacking and killing other crows in different cases.

However, we hope you have learned a lot about why crows attack other crows. If you have ever experienced a deadly battle among crows or between crows and ravens, let us know below in the comment section.