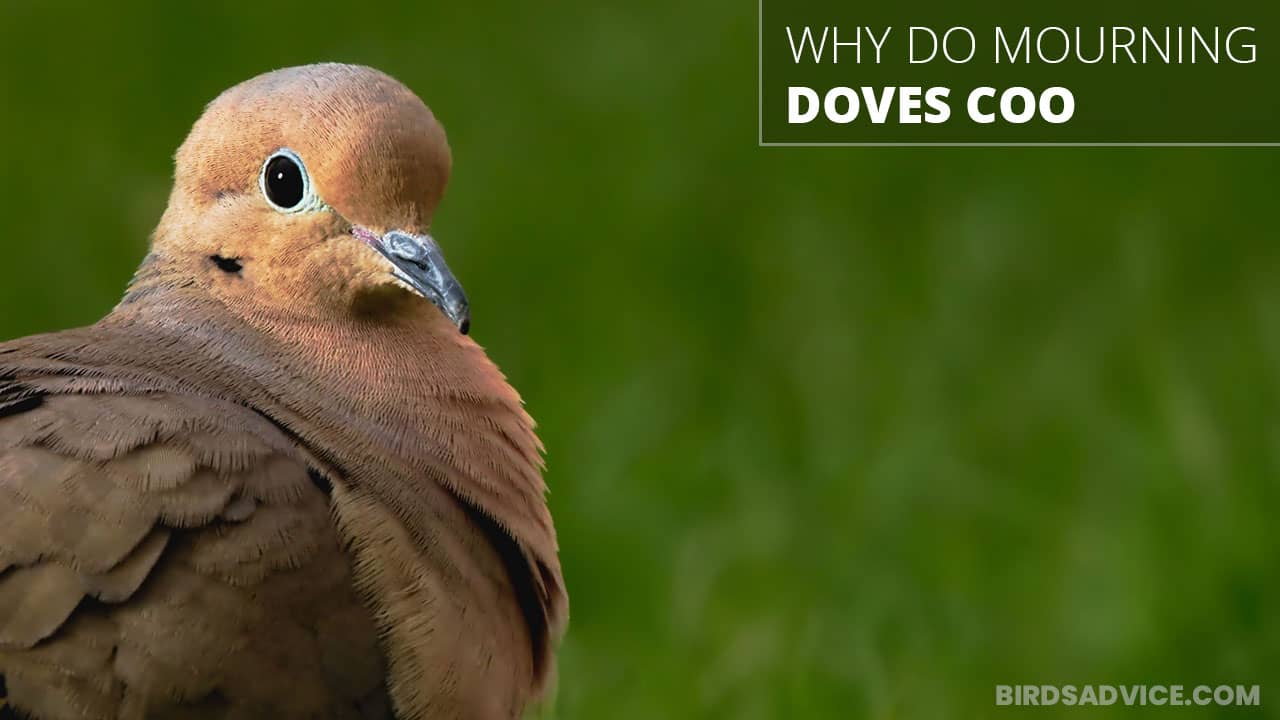 Doves are adorable, stout-bodied birds, derived from the Columbidae bird family, and pigeons also belong to this group. That’s why they’re quite similar to pigeons in terms of size and outlook but quite distinct in characteristics. As such, mourning doves can create the cooing sound all day long, which pigeons can’t.

But the question is, why do mourning doves coo? The male doves that can only produce the cooing sound start cooing when they want to entice the potential mate. They yield two different sequences of coos; one is known as the advertising or perch coo, while the other is the nest call for building the nests.

However, this article is all about doves’ cooing; we will dig out why they produce these sounds and much more related information. So, without further delay, let’s read this content thoroughly.

Below, we have sorted out some promising answers to enrich your knowledge regarding doves’ calls.

We humans can talk to communicate, but birds can’t. Hence, their communication medium is different. Birds create various low or high-pitched sounds to communicate with other birdies.

That said, doves also do the same, and they use cooing to communicate and send messages to other doves. For instance, female doves make coo calls to grab the attention of their nestlings.

But we know those female doves can’t yield a cooing sound, right? In a very rare case, they do; female doves are rarely seen to create the cooing call. We will briefly discuss this topic later in this article.

Male mourning doves coo to attract the female doves to mate, and cooing is a part of their mating process. However, sometimes female doves also coo, but their sounds are comparatively weaker.

In contrast, the make doves enunciate high-pitch cooing to lure other nearby female doves.

As you know, doves belong to the Columbidae family; they obtain this habit as a part of their lifestyle. That said, when they need to build nests, their very first job is to produce cooing sounds.

Not only that, but doves also coo during the making process of their nests, and it’s more like humans sing while performing a particular task.

Do Mourning Doves Coo When They Encounter Danger?

No, mourning doves don’t yield the cooing sound when they face danger. Instead of cooing, they make a rattling sound, and they do it by flapping their wings.

They produce this sound to make other birds aware of the nearby predators. Sometimes, they also make this rattling sound to frighten predators and chase them away.

Do Mourning Doves Coo At Night?

Doves are diurnal bird species, and they tend to remain quiet and asleep at night. Therefore, they don’t coo at night.

However, you may have heard them cooing at night, and the possible reason for that is they might have faced danger.

Yeah, a mourning dove will coo at night when it notices any sudden, unusual movement of anything or gets startled by a predator.

The other reason for cooing at night for male doves is that they use their calls when they are interested in mating at night.

Do Doves Coo While Flying?

Sometimes, doves coo during the flight, yes, another interesting behavior of these birdies. Male doves tend to coo constantly, especially while flying, and they do it to woo female doves. When performing the task, they can soar up to 150 feet.

Anyway, male doves produce high-pitched calls that you can hear from a far distance. So, you can say that they are very desperate to mate, and only single guys out there can understand these doves’ pain.

Not only do male doves make high-pitched calls, but they also fly at great heights. And during that time, they usually make five to seven notes in a call.

See how much they put effort into attracting female doves; please take some inspiration from them, single buddies.

As you already know, mourning doves coo for several reasons. They do it to attract and reach out to potential mates. They also make coo sounds to call out to their young ones or alert the other birds about danger.

So, if you have a group of dove flocks living near your home, you may hear their cooing sound all day long and probably, all night long as well.

However, the most common reason for doves to coo all day long is that they do it while building their nests. And they require at least two days to complete the nest-building chore. Hence, you may hear them cooing for an extended duration.

Yes, they coo, but it’s a rare case. Producing cooing calls is more common in male mourning doves, and they yield higher-pitched and more articulated nest calls than female doves.

Anyway, the female doves rarely produce coo calls to choose male doves to be their mates. Also, they coo to mark their territory, warn other birds, and call out the nestlings.

Why Do Mourning Doves Bow And Coo?

After scoping out and finding the desired mates, male doves perform a slightly elaborate bow and coo combination in front of the female mourning doves. They do these tasks for flirting purposes.

Once female doves are impressed and accept male mourning doves’ gently-presented offer, male doves fly on the nesting site, sit on the nests and start to bow, coo, and flutter their wings.

Mourning doves are a significant part of the ecosystem, and they play a vital role in making Mother Nature look more astonishing. If you hear their cooing calls, your heart just melts away, and your mind gets refreshed.

These sound effects work as a cherry on the top and double up the fun of your birding adventure. But everybody doesn’t love to hear their calls; some get disturbed and take necessary steps to prevent them from calling.