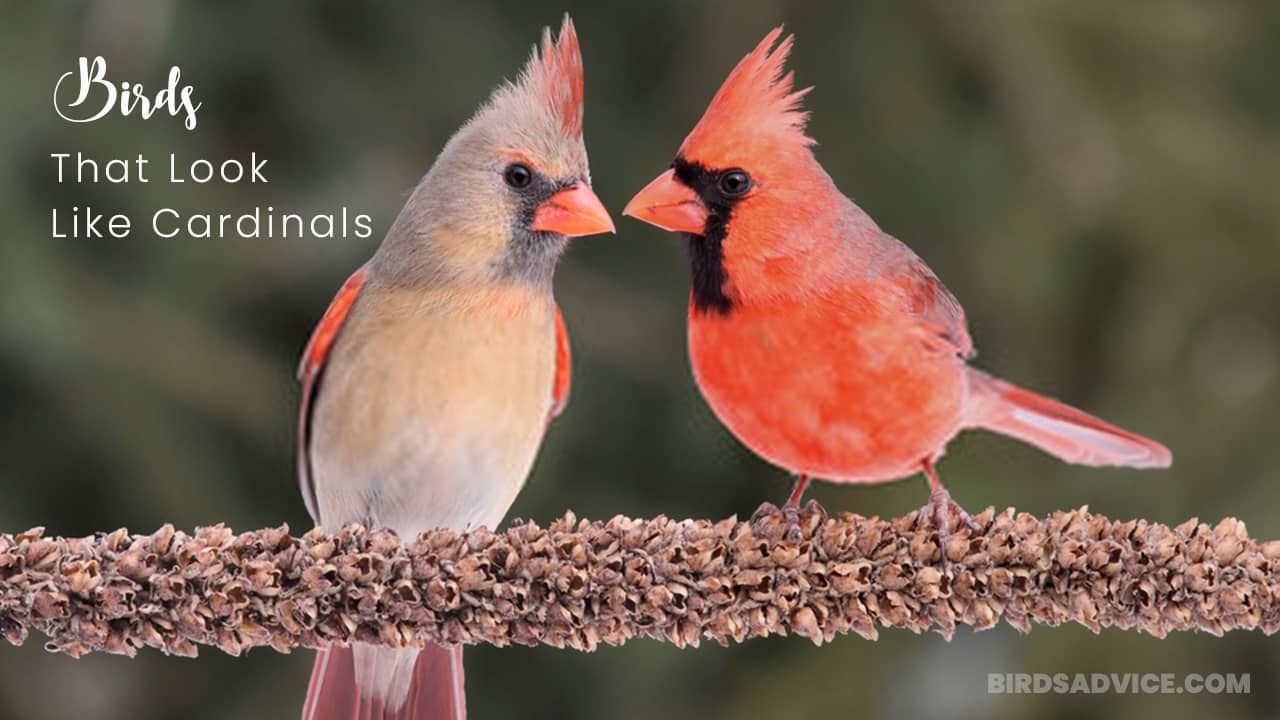 So, which birds look like cardinals? Cardinal look-alike birds are pyrrhuloxias, phainopeplas, vermilion flycatchers, scarlet tanagers, summer tanagers, and more. Surprisingly, a pyrrhuloxia could be confused with a female northern cardinal, since they’re quite similar.

This page is a supplement to our recently published article on attracting cardinals to your yard. Once you finish reading here, we suggest visiting the recommended article to learn more about inviting these beautiful songbirds using a few simple strategies.

Now, let’s see the list of cardinal look-alike birds below.

Pyrrhuloxia, also known as desert cardinals, usually like drier desert scrubs. These cardinal look-alike birds live in Mexico and the southwestern United States. They can barely be found in Arizona, southeastern Texas, and southern New Mexico.

Pyrrhuloxias and cardinals belong to the same genus (Cardinalis). These birds are quite similar to cardinals in terms of body shape, size, tall crest, and red feathers in the wings. Both birds weigh almost equal and have the same songs. In terms of coloration, a pyrrhuloxia and a female cardinal are almost the same.

Although vermilion flycatchers don’t have a crest like cardinals, these birds have raised crown feathers on the head and a thin black mask. In fact, they are similar to cardinals in terms of red color throughout the breast and belly.

Phainopepla is found throughout the southwestern United States. These birds are readily available in the deserts of Arizona, southern California, southern Nevada, and the Baja Peninsula. Apart from deserts, they prefer dry woodlands. They’re often seen on tall trees and shrubs.

Phainopeplas are quite similar to northern cardinals in terms of size and shape. Like cardinals, these birds have shaggy crests and long tails. They also have round eyes and cardinal look-alike legs with sharp nails.

The key difference between a phainopepla and a northern cardinal is coloration. Males and females are glossy black and dark grey, respectively, while cardinals are red (females are bright grey). Besides, phainopeplas have slimmer beaks and more slender bodies.

Scarlet Tanagers usually live in evergreen forests in eastern, midwestern, and northeastern parts of North America. In winter, these birds head to the south in the northwestern part of South America. Apart from forest areas, they prefer shrubby habitats and backyards.

The main similarity between a scarlet tanager and a male cardinal is the red color. Like cardinals, scarlet tanagers have rounded eyes. Although they don’t have crests, they have slightly-raised crown feathers on the head.

Summer tanagers are usually available in the Southern (both southeast and southwest) United States. These birds head to northern South America, Central America, and Mexico in winter. You may also find a few of them in Texas and Florida in winter.

The main difference is summer tanagers don’t have crests like cardinals. These birds have slightly long, pale yellow bills, while cardinals own red thicker bills. Besides, the tails of summer tanagers are shorter, but northern cardinals have longer tails.

Now that you know the birds that look like cardinals, you won’t get confused in identifying northern cardinals and their look-alike birds. A pyrrhuloxia is quite confusing, looking like the same as a female northern cardinal.

However, other similar birds can easily be identified since they’re pretty different from cardinals. Keep in mind that phainopeplas have crests with shaggy feathers like northern cardinals, but they’re glossy black.