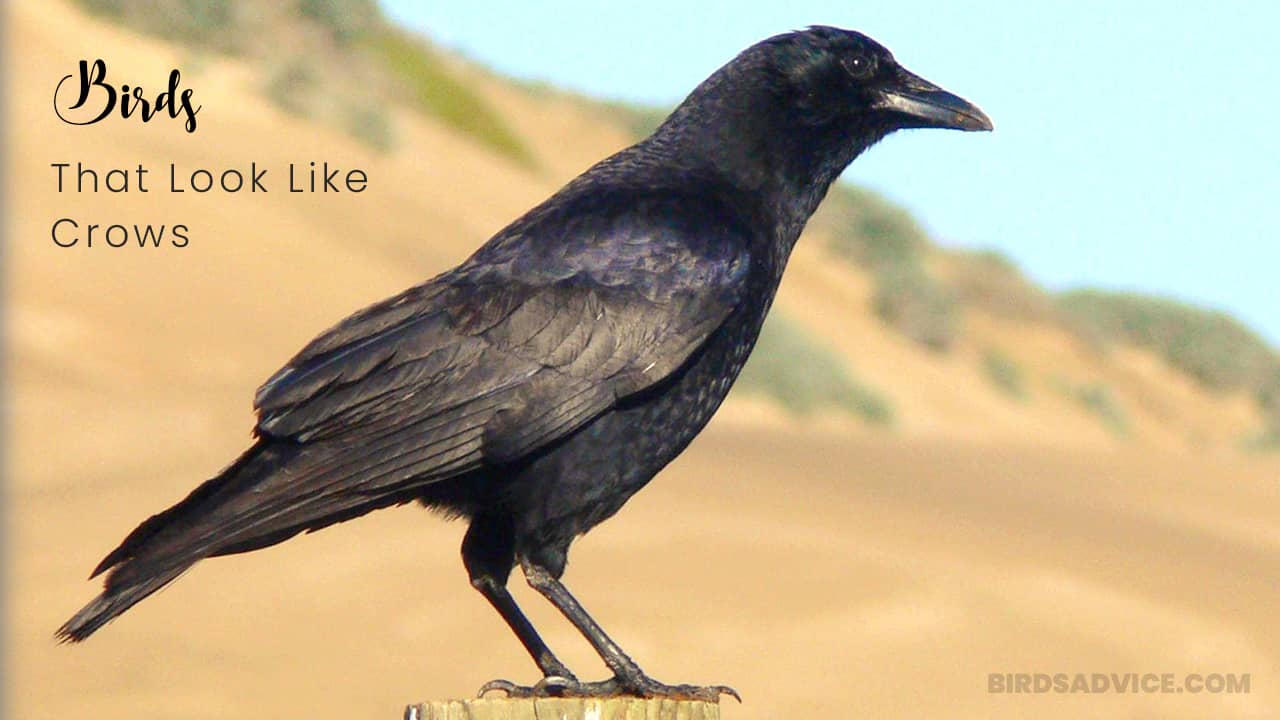 Once on a sunny day, I was with one of my friends outside. Suddenly, I saw a blackbird and shouted, “Look! It’s a crow!” My friend opposed, “No, it’s not a crow.” He added that some other blackbirds are out there that look like crows. It might be one of them.

This page is a supplement to our recently published article on attracting crows to your yard. Once you finish reading here, take a look at the recommended article to learn more about inviting these environment-friendly blackbirds using a few simple techniques.

Now, let’s see the list of crow look-alike birds below.

Common Ravens are usually available throughout northern and western North America, particularly in California, Canada, and Alaska. These birds can also be found in Northern Hemisphere, Mexico, and Scotland. They prefer open and forest areas, including deserts, sea coasts, grasslands, etc.

The main similarity between a common raven and an American crow is both are entirely black, though common ravens have minor hints of grey and brown in their feathers. They’re also included in the same genus, Corvus (Details info about corvus).

Common ravens are pretty larger than American crows, like red-tailed hawks. They have much larger, curvier, and sharper bills than those of American crows. Their tails are wedge-shaped, but crows’ tails are fan-shaped.

Want to know more differences between crows and ravens? We have a recently published article on this topic (read here). You can check it out for further information.

Common grackles are native birds in North America, especially in the United States (almost all states east of the Rocky Mountains). However, you may not find them in Washington State, Nevada, Montana, Oregon, and Alaska. They prefer open and semi-open areas, such as agricultural fields, city parks, and suburban lawns.

Common grackles share the same family as American crows. These birds look all black like crows from afar. Besides, their bills, legs, and tails are actually black. The bills are sharply pointed like the bills of American crows.

Brown-headed cowbirds are native birds in North America, permanently living in the southern parts of the area. These birds head to the southern United States and Mexico during harsh weather. They usually prefer open and semi-open areas, including fields, meadows, forest edges, lawns, and pastures.

In terms of body color, brown-headed cowbirds are similar to American crows. Even, they appear all black from afar and in poor light. Besides, the eyes, bills, tails, and legs are black, just like those of American crows.

When it comes to differences, brown-headed cowbirds are smaller than American crows. The most noticeable difference is these birds have brown heads. They also have finch-like, small heads and smaller bills than those of American crows.

Western jackdaws, also known as European jackdaws, Eurasian Jackdaws, or simply jackdaws, are found in northwest Africa and all over Europe, especially in Western Europe. They usually prefer open and semi-open areas, including cultivated lands, coastal cliffs, and pastures.

Western Jackdaws are like the cousins of American crows. Both birds belong to the same genus, Corvus. These birds have black bills and legs similar to American crows. Due to the grey feather, you may confuse them with juvenile hooded crows.

Pied Currawongs are native to Australia. They’re readily found all over eastern Australia, from Victoria to northern Queensland. They prefer rural and semi-urban environments, including agricultural fields, forests, woodlands, and suburban areas.

The most noticeable difference between a pied currawong and an American crow is that the pied currawong has slightly white patches in the tail feathers and wings. Unlike crow feathers that appear shiny, currawong feathers look like dark charcoal with a purple hue. Besides, pied currawongs have comparatively large bills and tails.

Western rooks are out there throughout Europe, including the Palearctic, Scandinavian countries, Central Europe, Western Europe, and Eastern Siberia. They prefer open areas, such as agricultural fields, pastures, city parks, suburban lawns, etc.

Western rooks belong to the crow family Corvidae. Thanks to the fully feathered faces, juvenile rooks look quite similar to adult American crows. Both western rooks and American crows have black plumage. They also have similar blackish legs and feet.

The main difference is that the lower part of a black-billed magpie is white. These birds have a long tail, almost half of their body size. Besides, they have bluish-green iridescence in the wing feathers. The bills are shorter than those of American crows.

Alpine choughs belong to the crow family Corvidae. These birds have all black feathers, just like American crows. The feathers throughout the breast and belly are not glossy. Besides, the tails are fan-shaped similar to those of American crows.

Europe starlings, also known as common starlings, live in most of Canada and the United States, particularly in Texas and Florida. These birds prefer open habitats, including forest edges, grasslands, farmlands, and savannahs. They’re also common in lawns, squares, and city parks.

European Starlings resemble crows in black appearance. These birds have rounded black eyes like American crows. Their bills are pointed, and the nails are sharp.

The most noticeable difference is that European starlings are smaller than American crows. These birds have yellow bills and pink legs, while American crows are all black. Besides, the tails are wedge-shaped, and the bills are smaller.

Now that you know the birds that look like crows, identifying crows and their look-alike birds will be pretty simple for you. Common ravens, western jackdaws, western rooks, and alpine choughs are quite confusing, looking like the same as American crows.

However, other similar birds can easily be differentiated since they have unique features you don’t find in American crows. Remember, common grackles and brown-headed cowbirds are similar to American crows, but they have blue and brown head feathers, respectively.