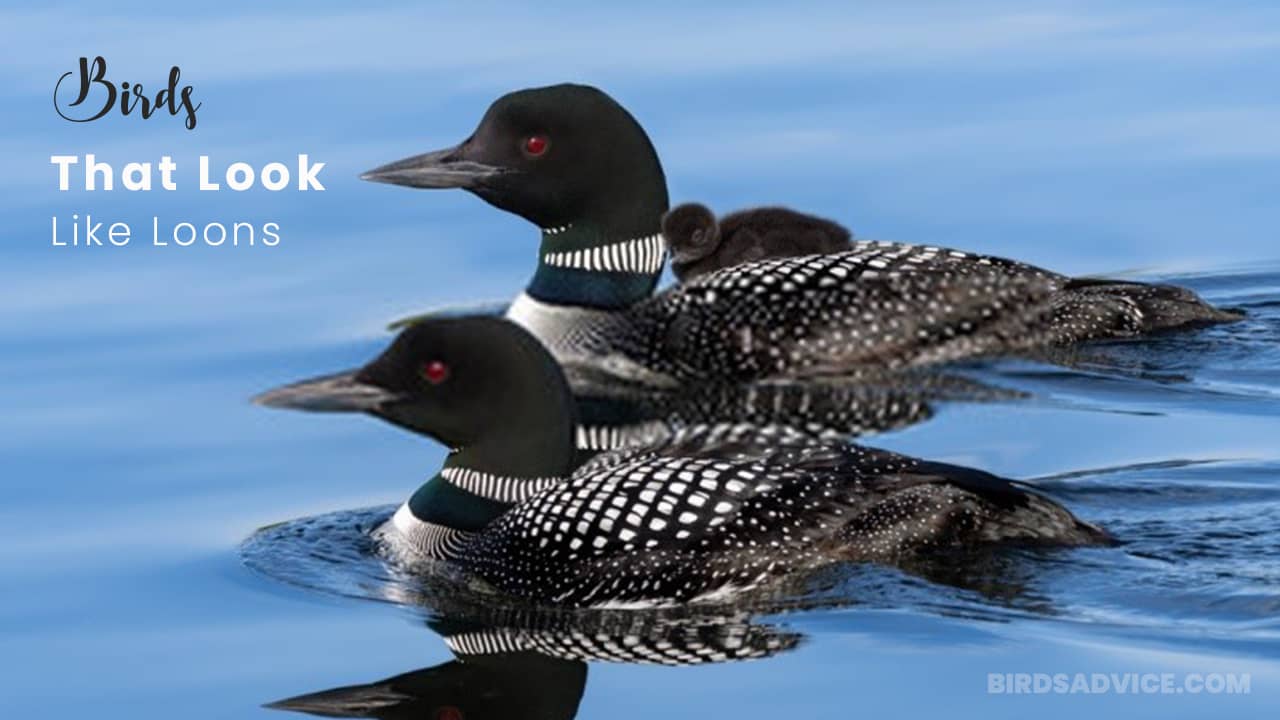 Have you ever gone kayaking in a serene lake? If so, then you might have encountered some black-and-white checkered waterbirds. They’re common loons. You might also have seen a few other look-alike birds from a distance but cannot recognize whether they’re common loons or not.

Do you want to know some cardinal and crow look-alike birds? We have recently published a couple of articles on these topics. Once you finish reading here, we suggest taking a look at the articles. You may find such birds that you’ve never witnessed before.

Common mergansers, also known as goosanders in Europe, are large waterbirds available all over North America, particularly in the Northern Hemisphere. These birds are found in rivers and lakes of forest areas in Asia and Europe, as far south as the Swiss lakes.

Western grebes, also known as dabchicks, swan grebes, and swan-necked grebes, are waterbirds found in both saltwater and freshwater environments. These birds are available in California, the eastern half of the United States, Canada, and sometimes Mexico. They forage for various fish, aquatic worms, insects, and crustaceans.

Western grebes are similar to juvenile common loons in appearance. Both birds have red eyes. In both cases, the head color is black. The most noticeable similarity is both waterbirds carry their chicks on their back after hatching.

Canada geese are large, wild birds native to the arctic and temperate regions of North America. These birds are readily available in the United Kingdom, Northern Europe, Eastern Asia, and Oceania. They usually stay in rivers, lakes, ponds, park lawns, and farm fields.

In appearance, Canada geese are pretty similar to juvenile or immature common loons. Both waterbirds have wide bills, looking the same from afar. Besides, male Canada geese look like female ones with almost no difference.

Double-crested cormorants are mainly found in central Canada and costs of the United States, particularly in western Alaska. These birds are usually available in rivers, large inland lakes, bays, and patches of flooded timber. They usually build their nests on the ground or high in trees.

Yellow-billed loons, also known as white-billed divers, are the largest species of the loon family. These birds are native to the United States, Canada, and Russia. They primarily breed in the coasts of the Arctic Ocean, the northern Pacific Ocean, and northwestern Norway.

Pacific loons breed in freshwater ponds in the Arctic, on tundra lakes, in coastal ocean waters and bays. These birds are available in the United States, Canada, Mexico, China, Japan, North Korea, and South Korea. They’re also found throughout western and northern Europe.

Pacific loons resemble the same loon family, Gaviidae. They have red, rounded eyes like common loons. Besides, the black-and-white stripes on the back are clearly noticeable in both birds. These stripes are also found under the throats.

Red-throated loons, also known as red-throated divers in Europe, are found in the northern hemisphere. These birds breed in taiga and tundra lakes, along with coastal ocean waters in the Arctic. Like other loon species, they have different plumage in breeding and non-breeding seasons.

American coots, also known as mud hens, are migratory birds found in most of North America. These birds are also available in the Pacific, Mexico, and as far south as Panama in winter. They usually stay in ponds, lake edges, roadside ditches, and saltwater inlets.

The most noticeable difference is that American coots don’t have white color on their plumage. Their bills are white, short, and sloping. The head feathers are slightly shaggy. You can see a small red patch on their foreheads. In addition, they have yellow-green legs.

Red-breasted mergansers are beautiful diving ducks found in freshwater lakes, rivers, bays, estuaries, and marine waters. These birds breed in the boreal forest and the coast on brackish, saltwater, and fresh wetlands.

Red-breasted mergansers have red, rounded eyes like common loons. These birds have a white neckband, but the neckbands of common loons are striped. Both birds live in the same territories year-round.

Like other loon ducks, arctic loons breed in Alaska and the Arctic Ocean. These birds prefer taiga and tundra lakes. They’re found in the United States, Canada, Mexico, and most northern European countries near the Arctic Ocean.

Arctic loons are pretty similar to pacific and common loons, belonging to the same loon family, Gaviidae. These birds have red, rounded eyes like common loons. The bills of arctic loons are black. They also have black-and-white checkered stripes on the back.

Now that you know the birds that look like loons, you can identify them and their look-alike birds very easily, especially when you’re on a kayak in a serene lack. In appearance, western grebes and Canada geese look similar to juvenile/immature common loons.

However, yellow-billed loons, pacific loons, red-throated loons, red-breasted mergansers, and arctic loons are quite confusing with common loons. You need to learn their characteristics, similarities, and differences very well.