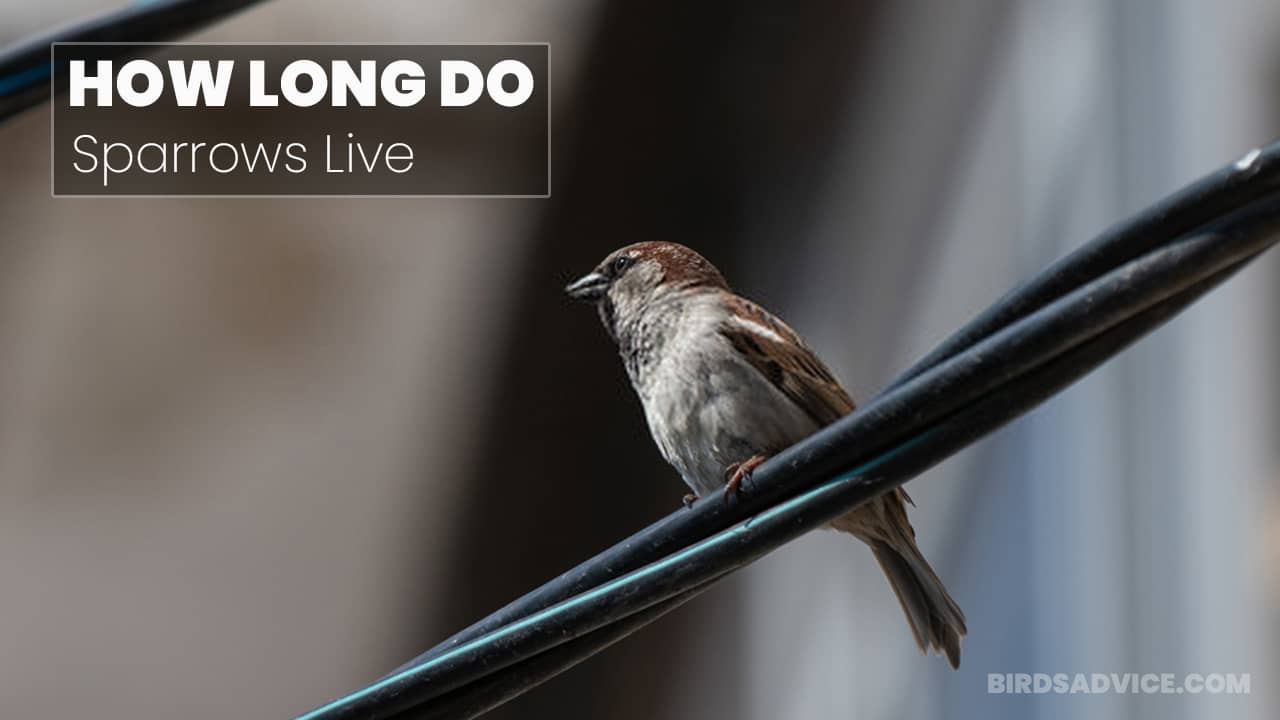 Did you know the oldest recorded wild house sparrow was 15 years and 9 months old when found in Texas in 2004? In captivity, sparrows were recorded to live up to 23 years. Do sparrows usually live longer, or is it just an exception? For that, you’ll need to know:

How long do sparrows live? The most common sparrow species, house sparrows usually live 3 to 5 years. However, the lifespan of other fascinating sparrows is longer, up to 9 years. In the wild, sparrows are short-lived due to some factors, like predators, diseases, environment, humans, and sometimes sparrows themselves.

Are you willing to know some unique tips to lure sparrows in your backyard? We have a previously published article on this topic. Once you have finished reading this post, you can have a look at that article if you wish.

The Lifespan of Various Sparrows

Even though the lifespan of house sparrows is on average 3 years, there are other sparrow species out there that can live longer. The lifespan of each species depends on where they live and how many problems they have to encounter.

What Affects the Lifespan of Sparrows?

Predators, injuries, outbreaks, parasites, and the environment mainly affect the lifespan of sparrows. Their populations have been declining for decades worldwide due to the excessive use of insecticides. If sparrows can avoid these threats, they can live twice as much as their expected lifespan.

Even though house sparrows are birds of prey to other songbirds, particularly eastern bluebirds, they – house sparrows – have a few predators, like domestic cats, various types of squirrels, small hawks, and some corvids, including crows and grackles.

For your information, cats kill billions of birds in the United States every year, and most of them are sparrows. Besides, crows, grackles, and small hawks sometimes eat sparrow eggs, nestlings, and even adults. Red and grey squirrels also attack sparrow nests.

Millions of sparrows, particularly song sparrows, are injured in the United States each year due to collisions with windows. A lot of studies show that around 60% of window collisions are fatal, which leads sparrows to death.

Sparrows may die of protozoan diseases, like coccidiosis and sarcosporidiosis. An outbreak can reduce their populations drastically because these birds travel in flocks and live in colonies. Besides, harsh winter weather can affect the lifespan of sparrows.

The blistering heat of summer can make sparrows vulnerable to infectious parasites. Typically, sparrows get unavoidable chicken mites that feed on these songbirds’ blood. As a result, sparrows get fatal infections, which may lead the birds to death.

Even though sparrows are very adaptive to the environment, climate change plays a significant role in diminishing their populations worldwide. Due to global warming, sparrows consistently lose enough resources for their existence.

The excessive use of pesticides is now declining sparrow populations worldwide. According to a study, a single seed coated with neonicotinoids, the most used insecticides in today’s world, can kill a songbird, particularly a sparrow.

Furthermore, imidacloprid, another widely used pesticide, makes sparrows lose a lot of weight. Consequently, sparrows have to postpone their migration and become deprived of mating. As a result, their populations decline with time.

Humans cause sparrows to die through the nest removing process. These little songbirds may build nests in any hole in your house. If you get rid of the nests or visit the nests frequently, parents will abandon the nests. Without the parents, young sparrows cannot survive.

On top of that, killing house sparrows in the United States is legal under federal law as house sparrows are nuisance species. We love birds, and therefore, we don’t support killing birds. If sparrows create nuisance in your yard, get rid of them humanely.

You can read our article on getting rid of sparrows. Click here!

Since house sparrows are aggressive, they could be the cause of other sparrow’s death. Sparrows always try to assert authority over fellow sparrows by intimidating, attacking, and killing less dominant ones. Sometimes, they damage the eggs and kill the young.

Aside from that, mother sparrows kill infected or unwell chicks to protect other healthy young. They often move the infected babies out of the nest. Why do mothers always move infected chicks rather than kill them? First-time mother sparrows are not smart enough.

What Can You Do To Reduce the Risks?

In order to reduce the negative effects on the lifespan of sparrows, you will need to discourage predators, keep feeders and nesting boxes clean, and don’t hurt the sparrows. Also, you should avoid pesticides and stop sparrows from flying into windows.

Since various sparrows are vulnerable to cats, keep your house cats away from sparrow feeders and nesting boxes in your backyard. If you have to let your cats go outside, always monitor them. For that, you can attach bells to your house cats to get alert when they approach.

When it comes to other potential predators, like squirrels, crows, and small hawks, you should provide sparrows with secure birdhouses for breeding and keep the birdhouses away from the reach of predators. Set tube feeders in your backyard to discourage crows and small hawks.

Sparrows are more prone to diseases and infections. That’s why you should always keep the birdhouses and feeders clean, particularly before and after a breeding season. To clean the feeders, soak them into a solution of 9 parts bleach and 1 part water.

Your clean feeders and nesting boxes attract a wide variety of sparrows in your yard. You can also reduce the chances of spreading diseases among other sparrows. If you cannot clean the stuff, inform a professional to do the job.

Even though sparrows create a lot of nuisance in the morning, you shouldn’t hurt them. Don’t kill sparrows. If they create nests anywhere in your house, don’t harm the nests. If you see the eggs are available in the nests, don’t try to relocate them. Wait until the chicks fly away.

Another way you may hurt sparrows is the use of harmful pesticides. A seed coated with pesticides can harm these little birds. If you want to lure sparrows in your backyard with a variety of food and water, don’t put pesticides in your yard.

How Long Can Sparrows Survive in Captivity?

According to many experts, the only way to avert the extinction of sparrows is to keep them in captivity. As you know, the longest captive sparrow was able to live up to 23 hours, while a wild house sparrow found in Texas in 2004 was recorded to live nearly 16 years.

If sparrows are kept in captivity, they will magnificently be safer. They don’t have to encounter habitat loss, predator attacks, and window collisions. However, we don’t support keeping sparrows in captivity because they play a vital role in balancing the ecosystem.

In summary, sparrows, on average, live longer in captivity than in the wild. But, finding precise data on how long sparrows live is quite difficult because they cannot be monitored from birth to death. Only the lifespan of captive sparrows can perfectly be counted.

No matter how many years sparrows usually live, there are some factors out there that can shorten the life of sparrows. If you’re a bird enthusiast, you have some duties to reduce the risks. You shouldn’t be one of them who always try to hurt sparrows.