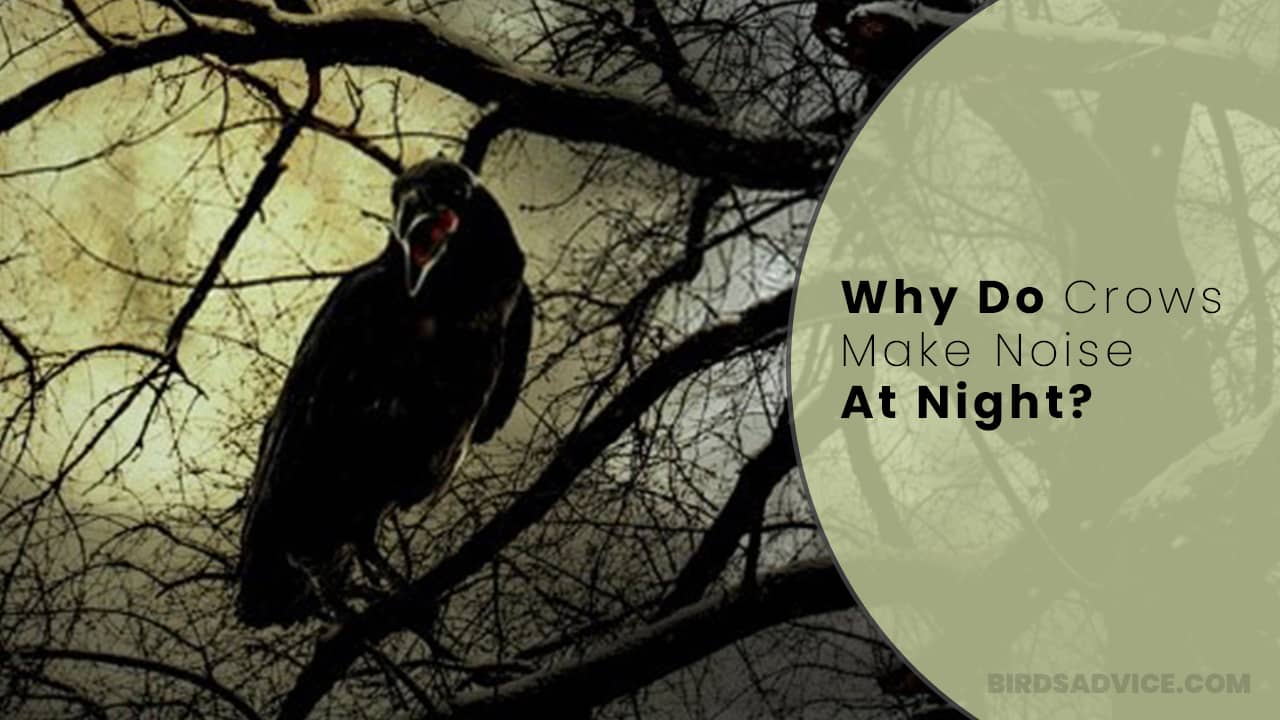 Over the years, everything has been calm and quiet in your neighborhood, especially at night. Suddenly, you hear a murder of crows cawing at night. The sounds are getting louder and more irritating. It’s really unusual because crows are supposed to be asleep at this moment.

Contents show
1 Why Crows Caw At Night
1.1 1. A Predator Might Be Nearby
1.2 2. Baby Crows May Caw for No Reason
1.3 3. Crows May Warn Others about the Coming Storm
1.4 4. Street Light Might Mess with Crow’s Day/Night Perception
1.5 5. Other Corvids Are Probably Cawing
1.6 6. Crows May Caw Before & After Sleep without Any Reason
1.7 7. Solitary Crows May Start Cawing
2 Can Crows Be Active During Nighttime?
3 Is It Bad To Hear Crows At Night?
4 How Do You Overcome the Fear of Crows Cawing At Night
5 Final Words

Apart from that, there could be some other reasons why crows caw at night. In this article, we’re going to talk about all that along with the meaning of crows cawing at night and how to overcome this fearful situation. Here is another article for you: “Do Crows Speak Like Parrots.”

Related Blog: Why Do Crows Attack Other Crows? [Click here]

Why Crows Caw At Night

Many reasons are out there that describe why crows caw at night. In this section, we’re going to talk about 7 probable reasons, including some paranormal ones. So, crows may sometimes caw at night without any solid reason.

Crows can caw at night if a predator, like a snake or an owl, is nearby. Once a crow suspects a predator, it alerts others to let them know about the probable danger. If a baby crow is in the nest, and a predator approaches it, crows make noise to drive the predator away.

2. Baby Crows May Caw for No Reason

If a crow nest containing baby crows is available in your backyard, you may already have heard their cawing during the night. Baby crows, either fledglings or yearlings, may caw at all odd hours without any obvious reason.

3. Crows May Warn Others about the Coming Storm

Crows are quite intelligent. They always warn other crows about possible dangers. When a storm is about to come, they may constantly caw very loudly to warn others, noticing thunders and bolts of lightning. They can behave like that even at night.

If a light source disturbs the sleep of the crows at night, they might be awake and start cawing. In cities, street lights are on throughout the night. They can mess with crows’ day/night perception, creating erratic patterns in their schedules.

5. Other Corvids Are Probably Cawing

Maybe, crows are not cawing, but crow-like birds (other members of the corvid family), such as ravens, grackles, jackdaws, rooks, etc., are cawing in your backyard at night. And you’re making the mistake of considering others’ calls as crows’ calls.

6. Crows May Caw Before & After Sleep without Any Reason

Crows sometimes caw before and after sleeping. Why they make noise is still a mystery. We don’t know what happens in their brains in those times. Most probably, they talk to other crows in their own language.

Crows usually live in flocks. They’re solitary birds. If a crow makes noise, other members of the family start cawing. This may not indicate any danger. Most probably, a murder of crows simply gathers around your house at night.

Can Crows Be Active During Nighttime?

Since crows sleep standing on tree branches as they’re half-asleep and half-awake, they can be active during nighttime. Typically, crows are not nocturnal birds. Similar to other songbirds, they also go to sleep at night.

If a predator, like a snake or an owl, approaches the crows, they start cawing in order to warm others. Besides, baby crows may be awake throughout the night and keep cawing for no apparent reason. Maybe, they try to draw their parents’ attention.

Is It Bad To Hear Crows At Night?

In our opinion, it’s just a common superstition. Although the screaming of crows during the night is uncommon, it won’t bring any bad luck to your life. In fact, the nightly cawing of the crows indicates that they’re in danger, not you.

How Do You Overcome the Fear of Crows Cawing At Night

First and foremost, don’t consider the nightly cawing of crows as bad luck, death, disease, evil things, and the reason for the upcoming accident. You shouldn’t take it seriously because they’re no more than silly superstitions.

If you live where crows roost, you may hear them during the day and nighttime. Hearing crows cawing during the day is pretty common, but they occasionally caw at night. We think there is nothing fearful for you when crows make noise at night.

Now that you know why crows make noise at night, you shouldn’t be much worried about their cawing. Don’t pay much attention to it. Most probably, a predator approaches them, or they’re having a family moment.

However, we hope you have learned a lot about why crows caw at night. If you have ever heard crows cawing during nighttime, you can share it with us. Have you ever encountered any bad luck after hearing crows cawing at night?