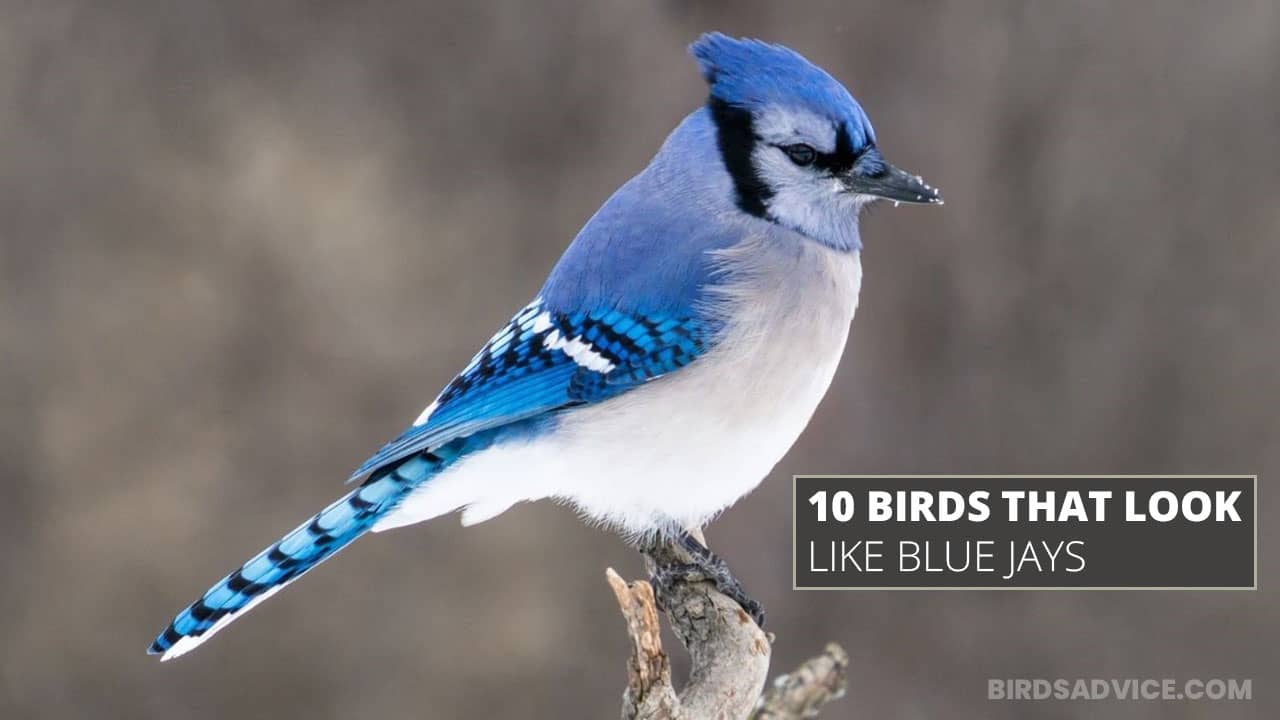 Blue jays are one of the most common wild birds in the United States. The mesmerizing color and the little crown on its head make them unique. But, there are a few birds (mostly Jays) that can easily make you confused with blue jays.

In today’s blog, we will talk about these blue jay’s like birds, their characteristics, their main similarities with blue jays, and how you can differentiate them. In BirdsAdvice, we have covered a few more blogs you may interest in.

Previously, we covered a few more articles on some other birds. Those may pick interest too. You can check them here:

As the name suggests, it’s a small migratory thrush from the mountain territory. The Mountain Bluebirds can be found in Western North America’s mountain districts, grasslands, and spread out trees and shrubs areas. These species migrate to Mexico and western Canada during the winter.

The blue color on the Mountain Bluebird is notable, just like the Blue Jay. Both of their heads are covered with blue color. And the underparts of these species are mixed of light blue and white.

The small Indigo Bunting is a migratory bird from the Cardinal family. This bird can be found in South American territory during the winter. And their preferred living places are brush areas, woodland, farmlands, and forest edges. However, Indigo Bunting’s breeding areas are Florida. Texas, and Canada.

The Blue Jay and the Indigo Bunting both are overall blue. Their head, wings, and tails are covered in rich blue. Another common thing between these two is the black color’s appearance on the wings and tails.

The major difference between the Blue Jay and Indigo Bunting is their size. Blue Jay is twice as the Bunting. The black necklace and the crest on the Blue are also absent on the Indigo Bunting.

The underparts, throat, and face of the Blue Jay are mostly white. But the Indigo Bunting is mostly blue with a few grey tints.

The Steller’s Jay is a comparatively large bird species. This bird is native to the mountains of Central America and the western territory of North America. Steller’s Jay is closely related to Blue Jay. It prefers the areas like evergreen forests, parks, and backyards for living.

The average length of the Blue Jay and steller’s Jay is close to each other. Both of them have an identical crest on their head. The prominent Blue on the Steller’s Jay is extended from the middle part of the body to the tail. Both of their tails are round-shaped.

The California Scrub-Jay is a medium-large bird native to western North America. Southern British Columbia, western Nevada, and California are the usual places to find them. They prefer oak woodlands, backyards, pastures, and orchards for living.

The Blue Jay and the California Scrub-Jay are quite similar in length. Both of their upper sides are rich in blue. And the lower body parts are lighter. The heads of these species are blue also.

The necklace on the California Scrub-Jay is blue, and it is black on the Blue Jay. The face appearance of these two species is different too.

Another member of the family of Jay that has similarities with our Blue Jay is Canada Jay. It’s a passerine bird found in New Mexico, Arizona, and spread throughout northern North America. The Canad Jay prefers boreal forest and high mountain areas.

The Canada Jay and Blue Jay have similar body lengths. Both of the bird species have pale lower body parts. And the bills are conical. Like the Blue Jay, Canda Jay has the same color pattern around the throat, face, and the above.

There are very few similarities between these two bird species. Except for the length and color pattern, there is nothing very similar between these two. The Canada Jay is overall black and white with a mix of grey.

And the Blue has a beautiful crest above its head. That isn’t the case for the Canda Jay. The bill of the Canda Jay is shorter than the Blue Jay.

The Green Jay is part of the new world jay species. This bird is native to southern Texas, Honduras, and other Central American areas. The Green Jay prefers thickets, parks, and woodland areas for living.

Although both Blue Jay and Green Jay are from the Jay family, there are only a few similarities between them. Both of them have blue color on their head. Also, the average length of these birds is the same as well. The glimpse of black on the face is identical too.

The Green Jay overall gree. While the Blue Jay is mainly blue. The black throat and face of green Jay are different from the other. The Blue Jay has white and light blue below. And the Green Jay has light green in lower parts.

The Blue Jay’s prominent crest is absent on the green Jay. Also, the legs are longer, and the body shape is more slender than the Blue Jay.

The Florida Scrub-Jay is a member of the scrub jay native to the North American Territory. They’re also known as Florida Scrub-Jay as this bird species specially lives in Florida. You will find them in low-growing oak and scrubby Flatwoods.

The Florida Scrub-Jay and Blue Jay are quite similar in length. Also, both of their head and upper parts are affluent in Blue. Down body parts are pale-colored on both bird species. Both of their tails are long too.

The beautiful black necklace on the Blue lacks the Florida Scrub-Jay. Also, there are a few white and black spots on the wings and tails of the blue Jay that aren’t the same for the other.

The Woodhouse’s scrub-jay and blue Jay are similar in the blue color above their body. Both of these species have a breast band and white-colored throat. The tails are the same size too. The below parts are pale white or gray, which may confuse you with one another.

Even though they both are blue, the Blue Jay is brighter than the Woodhouse’s scrub jay. Their breast band color is different from each other. The Blue Jay has white and black spots on the wings and tails.

The Pinyon jay is another member of the Jay family that has similarities with our Blue Jay. This bird species are residents from southwestern Dacota, central Oregon, a few areas of Arizona, California, western Oklahoma, and central New Mexico.

The Blue Jay and Pinyon Jay comparatively have similar lengths. Even though the Pinyon Jay has lighter Blue, the dominance of light Blue is quite visible, just like the other one. Both of their head, upper bodies, wings have dominance of the Blue.

The face of the Pinyon Jay is mostly blue with tints of grey around the eyes. The lower parts are mostly white and blue shade on the blue, while the pinyon jays are pale or blue-gray.

The Mexican Jay is a new world jay species that can be found in the southwestern united states, Sierra Madre Occidental, Central Plateau of Mexic, and the Sierra Madre Oriental. They prefer pine-oak-juniper woodlands, high mountain ridges, and similar places for living.

The richness of blue on the above and back is similar to the Blue Jay. And both of the species have whitish underparts. The blue Jay and Mexican Jay have a white throat. Moreover, both of their bills are thick and black.

The nice black necklace and the prominent crest make blue jays more attractive. But a few birds, such as mostly jay species, mountain bluebirds, and indigo buntings, can make you confuse them with the Blue Jay.

Even though these birds have similar appearances to Blue Jay, you can easily differentiate them with a little attention and observation. By the way, we hope you have learned a lot about this topic. Thanks for reading!