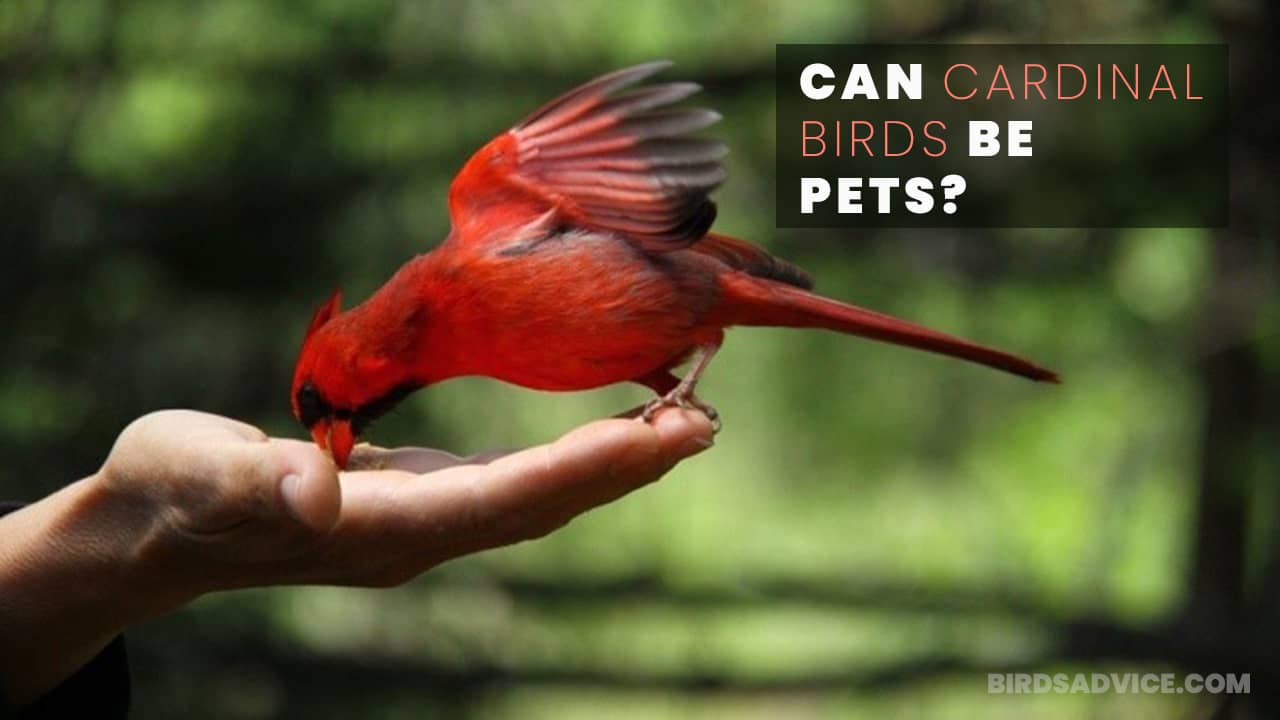 Did you know northern cardinals were once prized as pets? In the past, these beautiful birds were popular pets due to their bright color and distinctive sound. With time, new laws have taken place to protect these wild species.

Contents show
1 Why Can’t Cardinals Be Pets?
2 Is There Any Exemption to the MBTA for Cardinals?
3 Is it Legal to Own a Cardinal outside the United States?
4 How Much Does a Cardinal Cost?
5 What Should You Know Before Having a Cardinal?
6 Final Words

At present, can cardinal birds be pets? Cardinal birds cannot be pets because they’re protected by the Migratory Bird Treaty Act of 1918 in the United States and the convention for the Protection of Migratory Birds in Canada. These acts prohibit the sale, possession, killing, capture, or harm of this magnificent species. Violations can result in US$15,000 of fines and imprisonment of up to 6 months.

Want to know the differences between an American robin and a northern cardinal? We have an article on this topic. Once you have finished reading here, take a look at that article to learn how a cardinal differs from a robin.

Why Can’t Cardinals Be Pets?

In the United States, it is illegal to capture, kill, sell, or possess 1,026 different bird species, including northern cardinals by the Migratory Bird Treaty Act of 1918. You cannot transport these species without federal authorization.

The birds under the MBTA are wild, and protecting these species is essential to balance the ecosystems. If you violate the rules regarding northern cardinals, you may be subject to high penalties and a half year imprisonment.

Is There Any Exemption to the MBTA for Cardinals?

Even though it’s not legal to possess cardinals in the United States, the authority may issue permits for individuals and organizations to privately own cardinals. So, what purpose can northern cardinals be possessed for?

The individuals or organizations that are going to possess protected birds, particularly northern cardinals, must prove that there is a significant benefit for the birds or humans. In these cases, the minimal public value should be involved.

Is it Legal to Own a Cardinal outside the United States?

Like the Migratory Bird Treaty Act (MBTA) of 1918 in the United States, the Convention for the Protection of Migratory Birds in Canada protects northern cardinals. Besides, northern Cardinals are illegal to keep as pets in Mexico, Russia, and Japan due to the MBTA.

On the other hand, northern cardinals, known as Virginian Nightingale in Europe, are quite popular aviary birds in Europe. You cannot kill the species but possess and keep them as pets. However, as native birds, cardinals should be in the wild.

How Much Does a Cardinal Cost?

Northern cardinals may cost from $10 to $50 (€8 to €40) if they’re purchased in captivity. The price may change depending on where you are. I saw a video on YouTube about “Most Expensive Birds” where northern cardinals were priced $800.

What Should You Know Before Having a Cardinal?

As you already know, if your country permits you, you’ll only be allowed to pet a cardinal. However, you must know some facts about northern cardinals before having them as pets. Keep in mind that cardinals will survive best if they are in the wild rather than in captivity.

Northern cardinals are best suited to outdoor enclosures. If kept indoors, their vibrant color will invariably decline. Without making these species captive, you can attract them to your yard again and again by providing sturdy feeders, foods, and places to nest.

However, you have already known that you’re not allowed to keep northern cardinals as pets. We hope you won’t confine these beautiful creatures in cages. Share your amazing moments with cardinals in your yard below in the comment section.