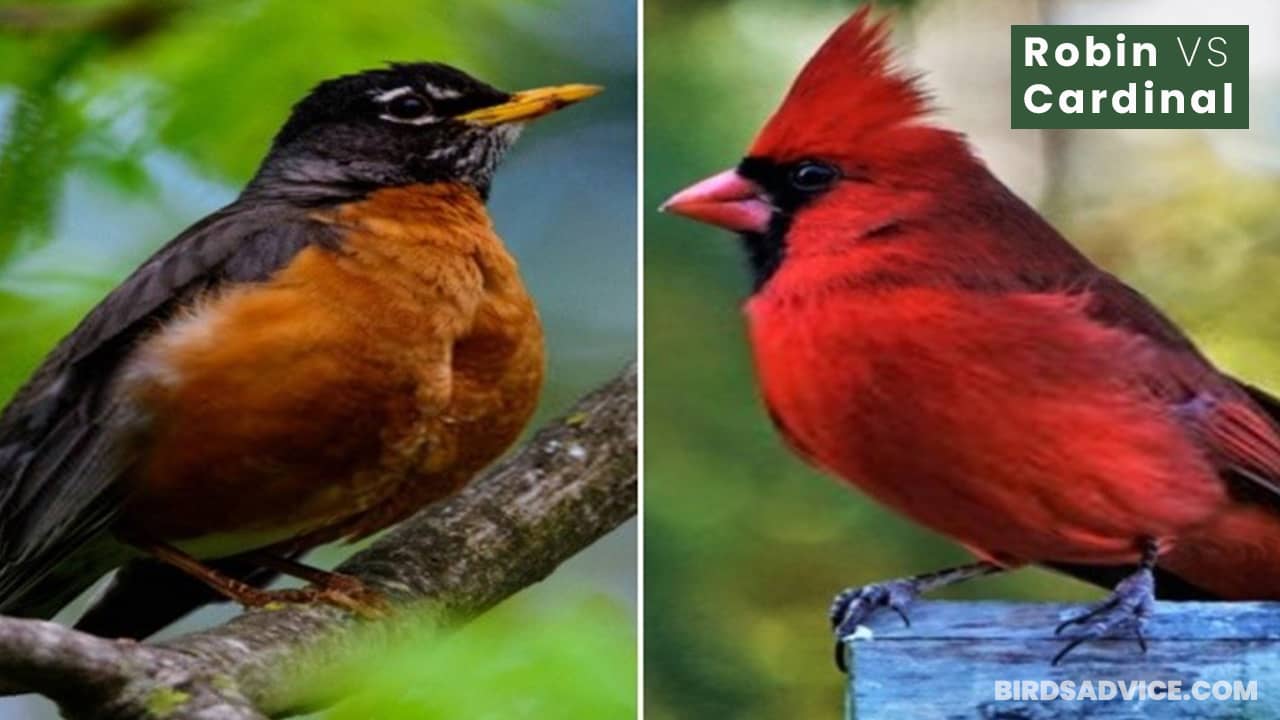 You might be one of them who often mix up American robins and northern cardinals. Regardless of quite similar songs, both wild birds are bright overall. But, if you look at the birds closely, you can find differences between them.

Apart from that, there are a variety of differences between these two wild birds. In this article, we’re going to talk about how to exactly tell the difference between them. After reading this comparison, read our article on male and female cardinals.

Robin vs Cardinal: At A Glance

While a male northern cardinal is pure red, an American robin comes with different colors that don’t include red. American robins are bright greyish-brown on their chest, dark on the head, and orange underparts. The females come with pale heads.

On the other hand, male cardinals are bright red overall, and the females are pale brown with warm reddish tinges on their crest, wings, and tail. In both cases, the female birds have a duller appearance than their male counterparts.

When it comes to shaping, both male and female American robins have a round body. On the other hand, northern cardinals are also rounded but have a slightly tallish body. Both North American species have long legs with multiple claws.

Northern cardinals have a red-orange colored, cone-shaped beak with a black circle around the beak. These birds also have a distinct crest that’s missing on robins’ heads. In contrast, American robins have slightly upward, small yellow beaks.

In flight, American robins have a swift, strong direct flight. A white patch is noticeable on their lower belly and lower tail. On the contrary, northern cardinals can fly with rapid wing beats. Regardless of flying, they can walk, hop, and flutter.

American robins usually belong to large flocks, particularly in the fall and winter. However, northern cardinals join small family ground only during their mating season. Once the mating season is over, the groups dissolve into pairs.

Both robins and cardinals make identical sounds and songs. That’s why many backyard birders confuse robins with cardinals and vice versa. However, the main difference between them is cardinal calls are slower and more melodious.

Listen to the Calls of American Robins

Listen to the Calls of Northern Cardinals

When first arrived in America, European settlers didn’t communicate well with local people. They named for what they saw. For example, robins are named for England’s beloved robin red-breasts, and cardinals are named for the robes of cardinals in the Church.

When it comes to migrating to somewhere else during winter, both American robins and northern cardinals don’t migrate. You can hear the joyous chirps and songs of robins and cardinals even in winter when most birds migrate to warmer regions.

Northern cardinals have greyish-white, buffy-white, or greenish-white eggs speckled with pale grey to brown. On the other hand, American robins have sky blue or blue-green, unmarked eggs. Cardinals lay 2 to 5 eggs at once, while robins lay 5 to 6 eggs.

Now that you know the differences between American robins and northern cardinals, you can easily tell them apart. Although their appearances are distinctive, they have quite similar songs, which are not easy to differentiate.

However, we hope you found this article quite helpful to understand the differences between robins and cardinals. If you still have any queries regarding these two species, feel free to let us know below in the comment section.