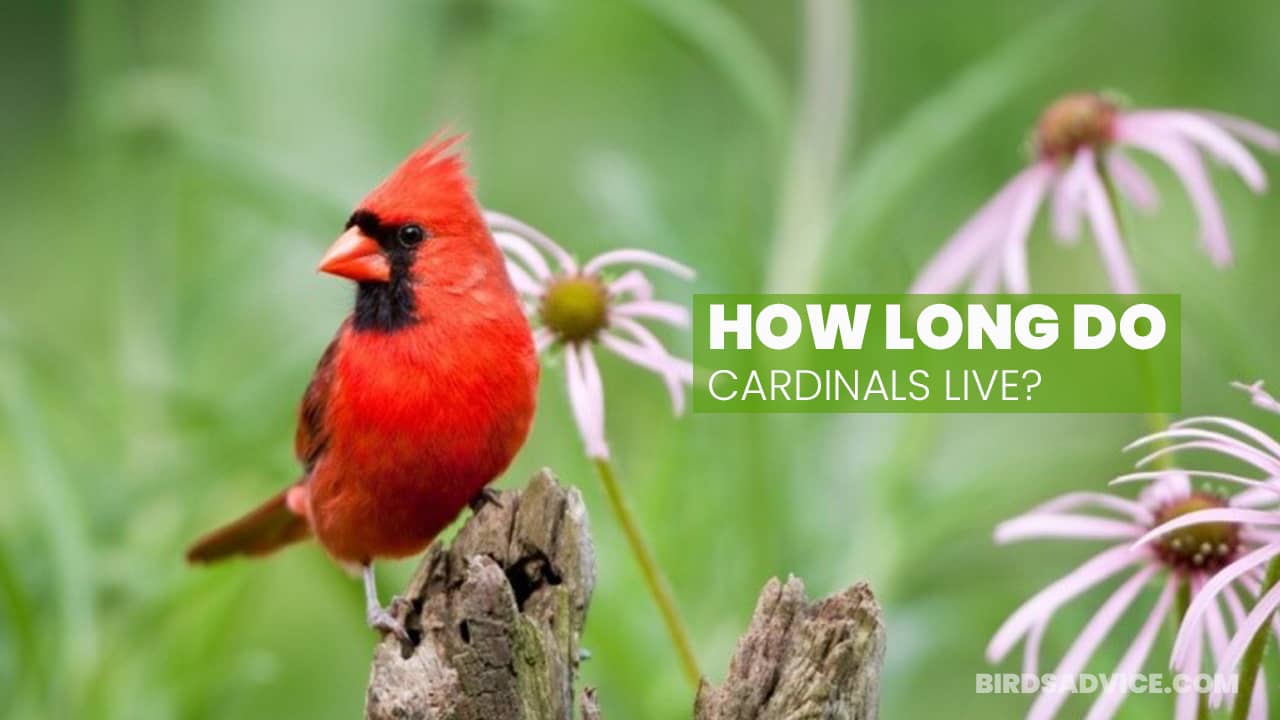 One of the most recognized birds, the northern cardinal is bright red overall with a distinctive black mask. The female comes with an elegant olive-brown with tinted red. These birds can live long, almost double their average lifespan, in the wild and captivity.

Now, the question is, how long do cardinals live? Northern cardinals, in general, live for 3 years although some individuals have records to live up to 15 years (5 times more than the average lifespan). The longest cardinal in captivity was recorded to live 28.5 years.

Want to know about the weight of cardinals? We have a previously published article on the topic. Once you have finished reading the article, we recommend you take a look at that article to learn how much different types of cardinals weigh.

The Lifespan of Various Cardinals

The Lifecycle of a Cardinal Bird

What Affects the Lifespan of Cardinals?

Cardinals, particularly northern cardinals, are vulnerable to various predators, including small hawks, owls, and house cats. Other birds of prey, different snakes, and chipmunks raid the nests of cardinals. Chicks are more vulnerable to mammals and reptiles.

Predators of Adult Birds and Fledglings:

Cardinals can die of various viral, bacterial, and fungal diseases. They may have avipoxvirus spread by mosquitoes or direct contact with other infected birds. Avian experts also find avian pox lesions in cardinals, which may lead them to death.

Besides, cardinals can be infected with lethal outbreaks of salmonellosis, lethal conjunctivitis, avian cholera, and aspergillosis. These fatal diseases can lead various types of cardinals to death before their expected lifespan.

Northern, vermilion, and desert cardinals are prone to having various parasites, like mites and ticks. These parasites can quickly spread diseases and other consequences, like debilitating feather damage. Therefore, the parasites may lead the cardinals to death.

Aside from that, cardinals can be found with internal protozoans, microfilarial nematodes, and ectoparasites that could be the reason for the loss of head feathers. Due to the parasites, cardinals may have avian malaria and lung lesions.

Like other wild birds, cardinals can get hit while flying into windows, considering that there is nothing in their ways. Consequently, they are injured or killed. Aside from window collisions, cardinals can die of catastrophic reasons, like storms.

Pyrrhuloxia, also known as desert cardinals, may die of dehydration due to increasing global warming. The normal temperature in deserts is going higher. Since trees are cut down on a regular basis, cardinals lose their habitat, which leads them to extinction.

During winter, many wild birds die of starvation due to the lack of enough food sources. Cardinals are one of them. Scientists examined that starvation causes depleted fat deposits, empty stomachs, kidney failure, small amounts of blood, and shrunken flying muscles.

What Can You Do to Protect Cardinals?

If you want to help cardinals be safe from parasites and diseases, keep your bird feeders and nesting boxes clean. Make sure to clean them thoroughly after every nesting season. So, parasites cannot increase their populations, and cardinals will be attracted again and again.

Take a look at our article on what kind of birdhouses cardinals use.

Cats are one of the predators of cardinals. To protect cardinals from cats, you should keep your house cats indoors. Place bird feeders in a place where wild cats cannot reach. You should abide by the rule to keep squirrels away from cardinals.

Since cardinals may die of starvation in winter, you should offer them a variety of seeds, nuts, and fruits in your yard during winter. Hungry cardinals will come to your yard and leave happily with full stomachs. This way, you can help other wild birds.

Read our article on what cardinals eat to know what to feed cardinals in winter.

How Long Do Cardinals Survive in Captivity?

Cardinals can live more in captivity than in the wild. The longest live cardinal was 28 and a half years old. When cardinals are in captivity, they’re safe from predators, diseases, dehydration, starvation, and window collisions.

Although cardinals live 3 years on average, they can live much longer. If cardinals can avoid the threats, their lifespan will be increased. When they’re in captivity, they are protected from unwanted accidents, viral diseases, and predator attacks.

However, we hope you have learned a lot about the lifespan of various cardinal species. If you have any experience in protecting a cardinal from sure death, you can share it with us. Leave comments below if we have missed anything important.