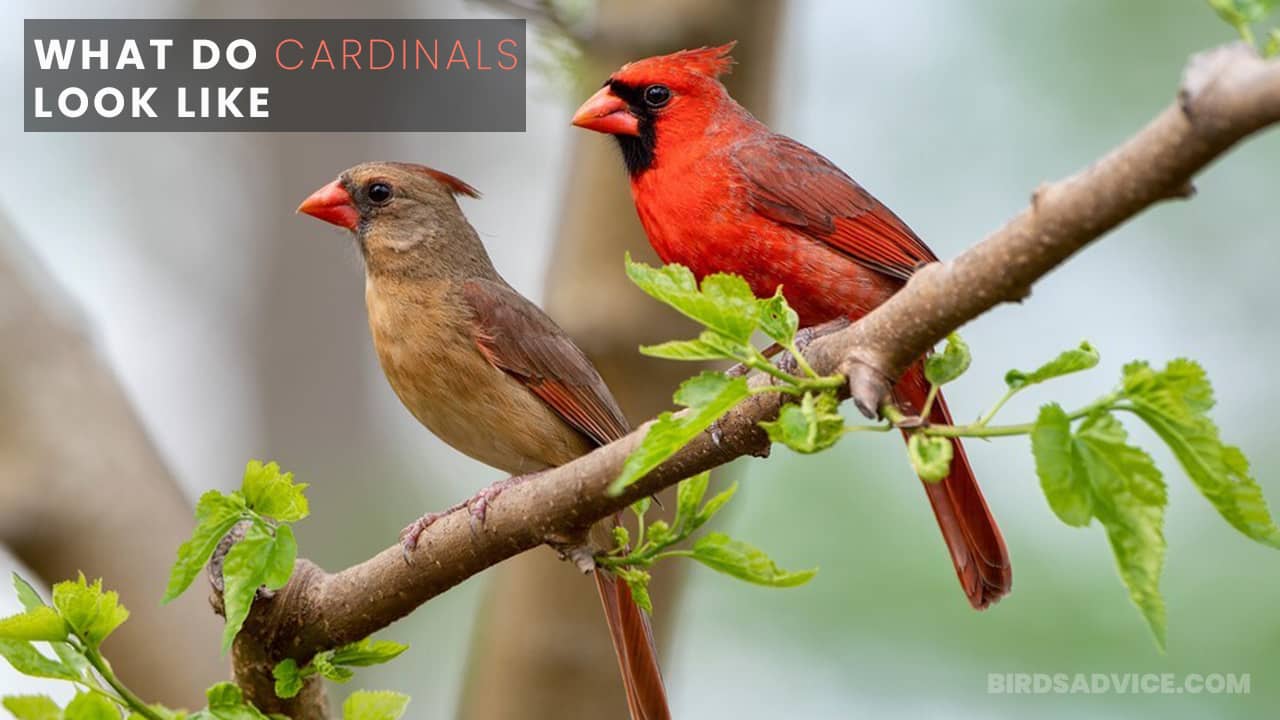 Those who are living in the United States and Canada would recognize northern cardinals. These wild birds are amazing, bright, and lively. They’re fairly large, long-tailed songsters with thick bills and prominent crests.

If you haven’t seen cardinals yet, you might be wondering, “what do cardinals look like?” Male cardinals have brilliant red plumage overall with a black face around the bill. The females, on the other hand, are pale brown with reddish tinges in the crest, wings, and tail. Both sexes have red-orange bills.

This article is a supplement to our previously published article on attracting northern cardinals. Once you have finished reading the current article, take a look at that article to know in-depth information about luring a variety of cardinals in your yard.

Northern cardinals are almost unmistakable with their holly-berry color overall. These vibrant birds possess stocky, medium-sized bodies. In the winter, they look even brighter against the snow. You might have already seen these birds on holiday cards and various arts.

Male cardinals have brilliant red plumage overall with a black mask and throat. They have stocky, medium-sized bodies, thick red-orange bills, and a prominent, triangular red crest. They are an inch (2 cm) larger than their female counterparts.

Female cardinals have pale brown, greyish-olive or tan plumage all over the body with warm reddish tinges in the crest, wings, and tail feathers. Like males, they have stocky, medium-sized bodies with thick, red-orange bills.

Although the females show a hint of black feather patch around the bills, they lack the black coloration. The females also have raised, triangular crests which resemble a mohawk. They have round eyes and slightly reddish upper legs.

The flight style of northern cardinals is rather slow but direct, repeating some quick wing flaps with a short close-winged pause. These birds usually don’t fly too far at once. During flight, they stay pretty low to the ground. And their broad rounded wings and long tail appear.

How to Identify Vermilion Cardinals?

On the other hand, the females are brown, grey-headed with some red accents. Like their males, they have seed-cracking, grey bills, a triangular classic red crest, and reddish tail. Both sexes have similar body shapes.

Desert cardinals, also known as Pyrrhuloxia, are found in Arizona, southeastern Texas, and southern New Mexico. These birds are like the cousins of northern cardinals. You may mistake a female cardinal for a desert cardinal or vice-versa from afar.

How to Identify Desert Cardinals (Pyrrhuloxia)

On the contrary, the females are grey or greyish-brown. Their red accents are slightly more muted. Juvenile desert cardinals look like their females. You may mistake a desert cardinal for a female northern cardinal or vice-versa from afar, but desert cardinals have yellow bills.

How to Identify Red-Crested Cardinals?

In addition, both males and females have striking red on the heads, which gives them the name, red-crested cardinals. Like other cardinals, these species have thick, cone-shaped bills. But, the color of their bills is grey.

Now that you know what cardinals actually look like, you can identify them whenever you see them in the future. You’ll also be able to distinguish between males and females of each species. FIY, male cardinals are more beautiful than the females.

However, we hope you have found the article quite helpful to know about what different cardinal species look like. If you see a cardinal in your yard, take a picture of it. Share the article with others to let them know about the identification of cardinals.