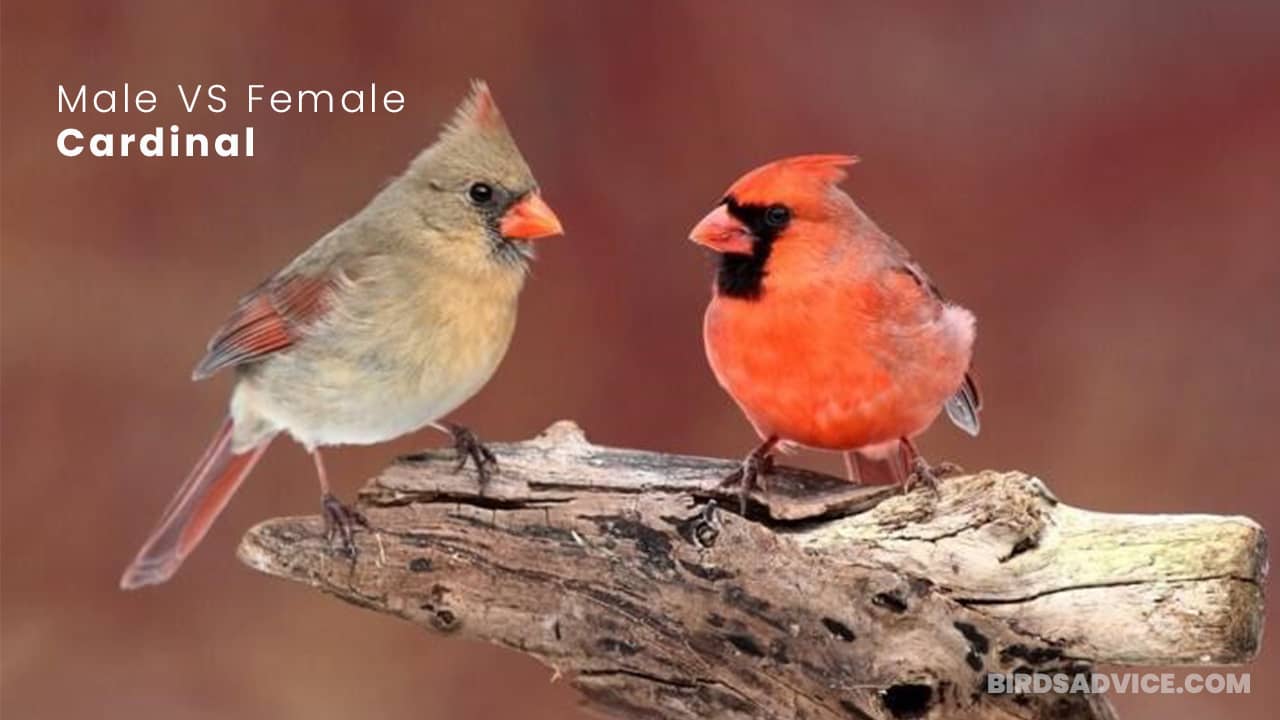 Many backyard bird enthusiasts are curious to learn whether the cardinal they usually see is a male or a female. As a birdwatcher, I’m always willing to know the gender of the cardinal I often notice in my garden. I can tell a male cardinal from a female one.

Apart from that, there are 3 types of cardinals, and each type has distinctive males and females. We’re going to talk about all these. Anyway, you can take a look at another article on attracting northern cardinals after finishing the current article.

Male vs Female Cardinal: At a Glance

Differences Between Male and Female Cardinals

Even though cardinals are mainly red, bright red cardinals refer to their males (bright red all over the breasts and pale red on the back). On the other hand, female cardinals are pale brown, sometimes reddish olive, overall with reddish tips on the wings, tail, and crest.

Both male and female cardinals have a wingspan of 9.8 to 12.2 inches (25 to 31 cm) with an average of 30.5 cm. In flight, the males are extremely red, flying or not, but the females show pale red undertails only when they fly.

The main way to identify cardinals is their crests. However, the crests of male cardinals differ from those of females. The male northern cardinals come with bright red crests, while the females have gentle red crests with grey plumage.

When it comes to breeding, both male and female cardinals have specific roles. Female northern cardinals build their nests, while the males supply nesting materials. Besides, females incubate and hatch the eggs, but males collect food for the family.

Similarities Between Male and Female Cardinals

You can identify cardinals with their bills, whether they’re males or females. Both male and female cardinals have reddish (sometimes, orangish) bills. Their bills are thick and pointed.

The tails of both male and female northern cardinals are red. However, the male cardinals have slightly more reddish tails than those of the females. Both sexes come with long tails.

Northern cardinals, whether males or females live for approximately 3 years in the wild. However, several cardinals have lived for 13 to 15 years. In captivity, a northern cardinal is recorded to live for 28.5 years.

Differences Among Other Male and Female Cardinals

On the other hand, female desert cardinals look like male ones. However, the females are grey with shaggier plumage. Besides, they come with slightly muted red, which sometimes turns orange. They also have slightly curved yellow bills like the males.

Red-crested cardinals are medium-sized birds, featuring a red-color head and a short red crest. Their bellies, breasts, and undertails are white. But, the wings, tail, and back are grey. Juveniles look like adults, except for a dull brownish orange head.

Unlike Northern cardinals, both male and female red-crested cardinals have the same plumage. However, the males have much brighter heads than those of the females. Both sexes feature silver-grey bills and dark legs.

Northern cardinals, vermilion cardinals, and desert cardinals (pyrrhuloxia) can easily be distinguished between males and females. In contrast, red-crested cardinals are difficult to understand their genders as they don’t belong to the cardinal family.

However, I hope you find this post quite helpful to identify different types of male and female cardinals. If you love this article, share it with others. Leave your valuable comments below if you want to share your experience with cardinals.