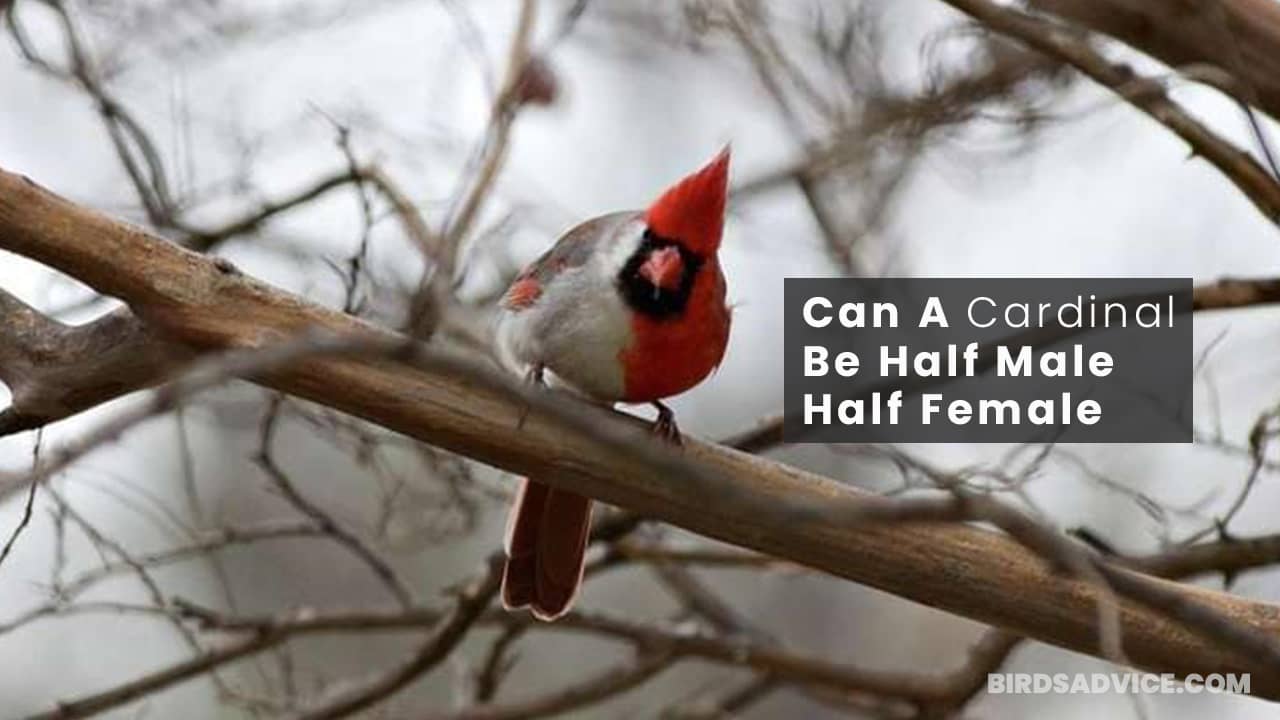 Have you ever watched any strange cardinal? It might be a yellow cardinal, a leucistic white-red cardinal, or a cardinal that combines both male and female colors. Jeffrey and Shirley Caldwell in Pennsylvania spotted a weird cardinal that looks both half male and half female.

Now, the question is, can a cardinal be half male half female? The short answer is yes. A cardinal can be both male and female. According to BBC News, retired ornithologist Jamie Hill spotted and photographed a unique cardinal he had ever seen. Half of the cardinal body was tan, while the other part was bright red. The colors were split lengthwise down the middle, looking like two cardinals had been merged.

Sounds strange? But, it’s possible. Let’s explain how a dual-gendered cardinal is born. Here is another useful article for you: “Can cardinal birds be pets?” Check it out right now or keep reading the current article until the end.

A half-male, half-female cardinal looks to be bright red with a black face mask on one side and pale brown or subdued tan on the other side. The colors are divided lengthwise down the middle of the cardinal.

Biologically, a dual-gendered cardinal is, most of the time, male on its right side and female on its left side. The wings look mostly red. That’s why a half-male, half-female cardinal looks reddish throughout the back when it perches on a tree branch.

What Is A Half-Male, Half-Female Cardinal Called?

Half-male, half-female cardinals are called bilateral gynandromorphs, also known as ‘halfsiders’ among ornithologists. The interesting fact is many other birds, chickens, and insects can be gynandromorphs; however, they’re not easily recognized.

Among cardinals, there is sexual dimorphism—their males have iconic bright red plumage, while the females are pale brown or tan. Thanks to these aesthetic differences between male and female cardinals, identifying a gynandromorph cardinal is much easier.

How Does A Bird End Up Being Dual-Gendered?

According to experts, determining sex in birds is slightly different than in humans. In human beings like you and us, the male cells have one X and one Y chromosome, while the female cells carry 2 large, gene-rich X chromosomes.

When it comes to cell mutation in birds, a nucleus of sex cells carries 2 chromosomes—one from the male and another from the female. The male sperm carries only a Z chromosome, while the female produces either Z or W carrying eggs.

If a female egg cell develops 2 nuclei, one with a W and one with a Z, and two Z-carrying sperm fertilizes them, then a gynandromorph is formed. After that, the gynandromorph develops half of its body as a female ZW and the other half as a male ZZ.

Retired ornithologist Jamie Hill, an enthusiast birder for over 48 years, reported a rare half-male, half-female northern cardinal spotted in PA. He shared the experience on Facebook on 21 February 2021 and entitled it a “once-in-a-lifetime, one-in-a-million encounter.”

Hill knew about the cardinal from a friend who had spotted an ‘unusual bird’ coming to her feeders. Hill wondered whether the cardinal was albino or leucistic, meaning the specimen wouldn’t have enough pigmentation in its feathers.

However, once Jamie Hill sees the cardinal’s pictures on the friend’s cellphone, he determined it was a bilateral gynandromorph. He asked for permission to photograph the bird by visiting the home where the rare specimen had been snapped.

Mr. Hill stayed the home for one hour. During this period, the dual-gendered cardinal visited the feeders only once. However, it thankfully perched on tree branches for a while. That’s why he was finally able to photograph the rare cardinal nearly 50 times.

Here are some images of the rare cardinal:

Earlier in 2019, a couple of avid birdwatchers, Jeffrey and Shirley Caldwell spotted another half male, half female cardinal in a backyard in Erie, Pennsylvania. Once in a day, Shirley Caldwell looked out her kitchen window. She noticed an ‘unusual bird’ in the dawn redwood tree.

However, when the cardinal faced straight, it was half red and half brown, and both colors are divided lengthwise down the middle, looking like someone stitched a male and a female cardinal into one bird. It was a rare gynandromorph cardinal hoax.

As soon as Shirley Caldwell saw the weird cardinal, she took a few images of the bird and shared them with her bird lover friends and colleagues. National Geographic Featured the story, and it went viral around the world. She posted the photos on Facebook on 27 January 2019.

This happily married couple has been attracting a wide variety of birds for over 25 years with bird feeders to their backyard. But, they have never seen such a wonderful bird in their lifetime. They were not sure they saw the rare cardinal until the bird came closer to them.

What Did Top Media Caption This Once-In-A-Lifetime Moment?

A rare cardinal with the male’s bright red plumage on its left side and the female’s brownish-grey feathers on its right side appeared in Rock Island, Illinois. This bird was the opposite of Jeffrey and Shirley Caldwell’s cardinal.

A retired high-school biology teacher was able to attract the dual-gendered cardinal to his backyard bird feeder. In December 2008, Brian Peer, a professor of biology at Western Illinois University with his colleague Robert Motz began studying the rare bird.

For the next two years, Prof. Peer visited the backyard of the teacher more than 40 times to study how the rare cardinal interacted with other birds and responded to calls. Unfortunately, he never saw the bird to be paired with others and singing.

According to Prof. Peer, half of the brain of the gynandromorph cardinal is male and another half is female. Biologically, the bird is itself a brother or a sister of the opposite side. These observations range from December 2008 to March 2010, nearly 2 years.

Professor Brian Peer and his colleague later published a paper in the Wilson Journal of Ornithology about the most extensive observations of the rare cardinal. Mr. Peer said that these observations increased their knowledge of gynandromorphs to the next level.

What To Do If You Spot A Half-Male, Half-Female Cardinal

Northern cardinals are one of the most stunning birds in North America. If you notice a rare half-male, half-female specimen in your backyard, at your favorite birding location, or somewhere in the wild, here’s what you should do.

Now that you know a cardinal can be half-male, half-female, you should consider yourself fortunate if you notice such a cardinal in your backyard or anywhere in the wild. Spotting a dual-gendered cardinal is quite rare.

Once you notice a gynandromorph half male half female cardinal, let us see at least a picture of it. We would like to be among the fortunate. However, if you have ever watched such a cardinal, share the experience with us below in the comment section.