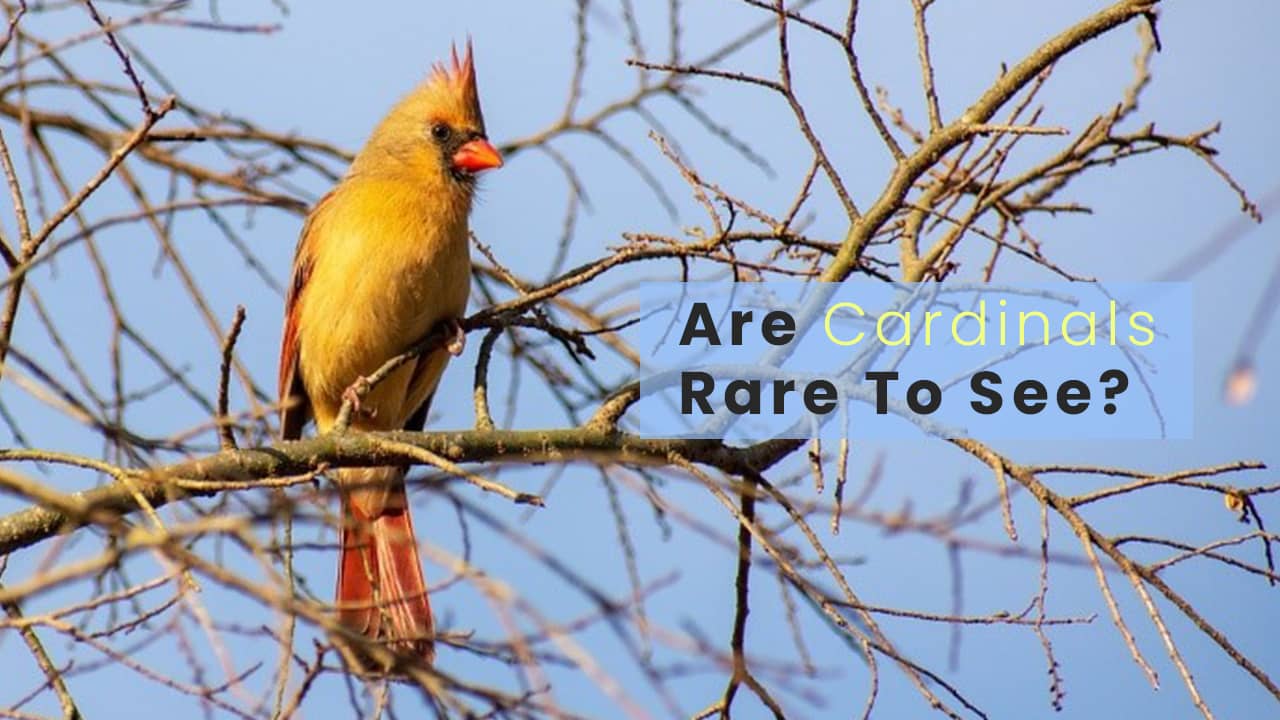 Contents show
1 How Many Cardinal Birds Are There in North America?
2 Availability of Cardinals Across Various Regions in the USA
2.1 #Region 1: The Northeast
2.2 #Region 2: The Southeast
2.3 #Region 3: The Midwest
2.4 #Region 4: The Southwest
3 Are There Any Rare Cardinal Subspecies?
3.1 #1. A Unique Subspecies of Northern Cardinal
3.2 #2. Half-Male, Half-Female Cardinal
3.3 #3. Yellow Cardinal
4 Final Words

Now, the question is, “Are cardinals rare to see?” The answer is no. Northern cardinals are not rare in North America. These medium-sized songbirds are one of the most visible birds in this region, particularly in winter. They have even been recognized as the state bird of 7 US states, including Indiana, Illinois, North Carolina, Kentucky, Ohio, West Virginia, and Virginia.

Apart from that, there are a few rare subspecies of northern cardinals out there in the United States. In this article, we’re going to talk about all that. Once you finished reading this article, we suggest taking a look at our recently published article on cardinal predators.

How Many Cardinal Birds Are There in North America?

77% of northern cardinals are available in the United States and Canada, while the other 22% are in Mexico. Why is North America suitable for cardinals? Cardinals adapt North American weather so successfully. They prefer being in North American forests, backyards, and fields.

Availability of Cardinals Across Various Regions in the USA

Here is a map of the United States, which shows the availability of northern cardinals across various regions.

Northern cardinals love the northeast region of the United States. These birds can be seen in Connecticut, Massachusetts, New Jersey, New York, Pennsylvania, and Rhode Island. In the north, they can rarely be spotted in Maine.

In the Midwest, northern cardinals are mostly populated in Illinois, Indiana, Iowa, Michigan, Missouri, Ohio, and Wisconsin. These red songbirds don’t seem to be abundant in Kansas, Nebraska, North Dakota, and South Dakota.

In the southwest, there are the largest populations of cardinals in Arizona, particularly Phoenix, Prescott, and Tuscan. However, these birds seem to be rare in the northwestern panhandle. Aside from Arizona, Oklahoma and Texas also contain these beautiful creatures.

Are There Any Rare Cardinal Subspecies?

19 cardinal subspecies are out there in the United States. Let’s see a few examples below:

#1. A Unique Subspecies of Northern Cardinal

In Arizona, Florida, and New Mexico, a rare subspecies of northern cardinals can be located, which is taller, brighter, longer-crested, and larger-billed than normal northern cardinals. They also have fewer black patches around the bills.

The rarest half-male, half-female cardinal is spotted in Pennsylvania and Texas. The cardinals looked like combined a male and a female into one bird. One part of the cardinal is bright red, and the other part is tan. This is called bilateral gynandromorphism.

Another abnormality is yellow cardinals spotted in Alabama and Illinois. This rare cardinal species is unable to convert its plumage into bright red. In some cases, they cannot get a nutritious diet, and environmental stresses keep the species away from getting adequate nutrition.

Since northern cardinals are non-migratory birds, they can be spotted in almost every state of the USA all year round. These beautiful scarlet songbirds are mostly available in some states, while they can rarely be seen in some other states.

However, we hope you have known a lot about if northern cardinals are rare to see or not in North America. If you have ever watched rare yellow cardinals or half male, half female cardinals, share the experience with us below in the comment section.