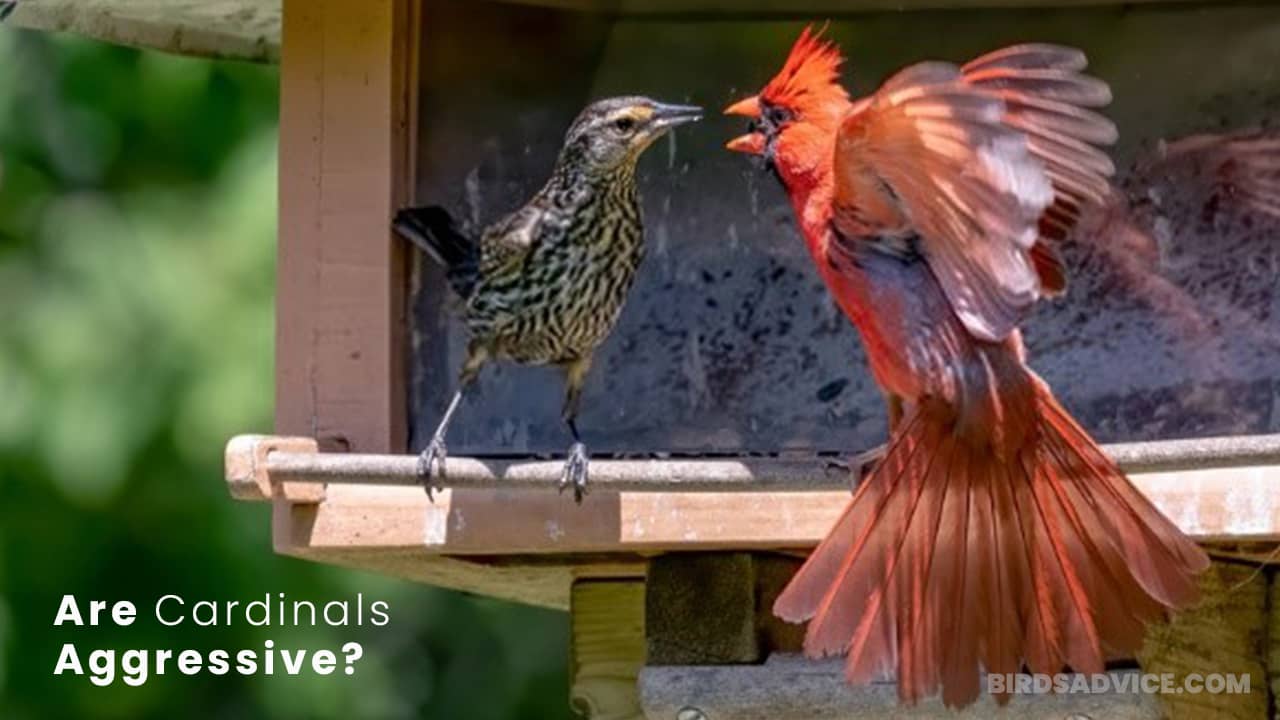 Northern cardinals are pretty eye-catching thanks to the blazing red color. These birds are chirpy and lively but look a bit bad-tempered on the outside. Their extreme territorial behavior triggers bird enthusiasts to think they’re not peaceful.

Contents show
1 Why Do Cardinals Become Aggressive?
2 When Are Cardinals Aggressive to Other Birds?
3 What is the Relationship Between Cardinals and Humans?
4 Final Thoughts

Now, the question is, are cardinals aggressive? The short answer is no. Cardinals are not typically aggressive bird species all over the year except for the mating and breeding seasons. During these periods, male cardinals can be aggressive to other males, birds of prey, predators, and humans if they come close to the female cardinals or their territory.

Not only that, but female cardinals can also be aggressive to other songbirds when feeding on bird feeders. Furthermore, this page is a supplement to our article on the availability of northern cardinals in North America. We suggest reading that article after finishing this one.

Why Do Cardinals Become Aggressive?

Cardinals become aggressive to defend their mates, broods, and territories from other male cardinals, birds of prey, and predators. During the breeding season, male cardinals try to show off their aggression so that any intruder cannot dare to come to their territory.

Besides, both male and female cardinals can be aggressive to other songbirds while feeding on treats. This aggression could occur in both breeding and non-breeding seasons, particularly in winter when natural food supplies are not abundant in the avian world.

When Are Cardinals Aggressive to Other Birds?

When defending the territory, mates, and broods, male cardinals can attack other males. This often leads cardinals to hit glass windows in order to charge the intruding males. In fact, cardinals get hit to their own reflection.

What is the Relationship Between Cardinals and Humans?

A friendly relationship exists between cardinals and humans. Cardinals often visit human backyards. They can even recognize human voices. Despite the presence of humans, cardinals spend a lot of time on their nesting sites without any hesitation.

Here is a YouTube video for you. A guy named Tom living in Texas held a friendly male northern cardinal. The cardinal perched on his hand remained calmly for a while, looking like the guy petted the cardinal. This could be an example of cardinal-human friendship.

Even though cardinals can be aggressive during breeding seasons, they are pretty social songbirds in the rest of the year. Befriending with cardinals is really easy; just place cardinal-friendly bird feeders with black oil sunflower seeds in your backyard.

However, we hope you have learned a lot about the behavior of northern cardinals. If you have ever watched any aggressive cardinals, you can share the experience with us. Always allow cardinals to eat delicious treats and make nests in your yard.