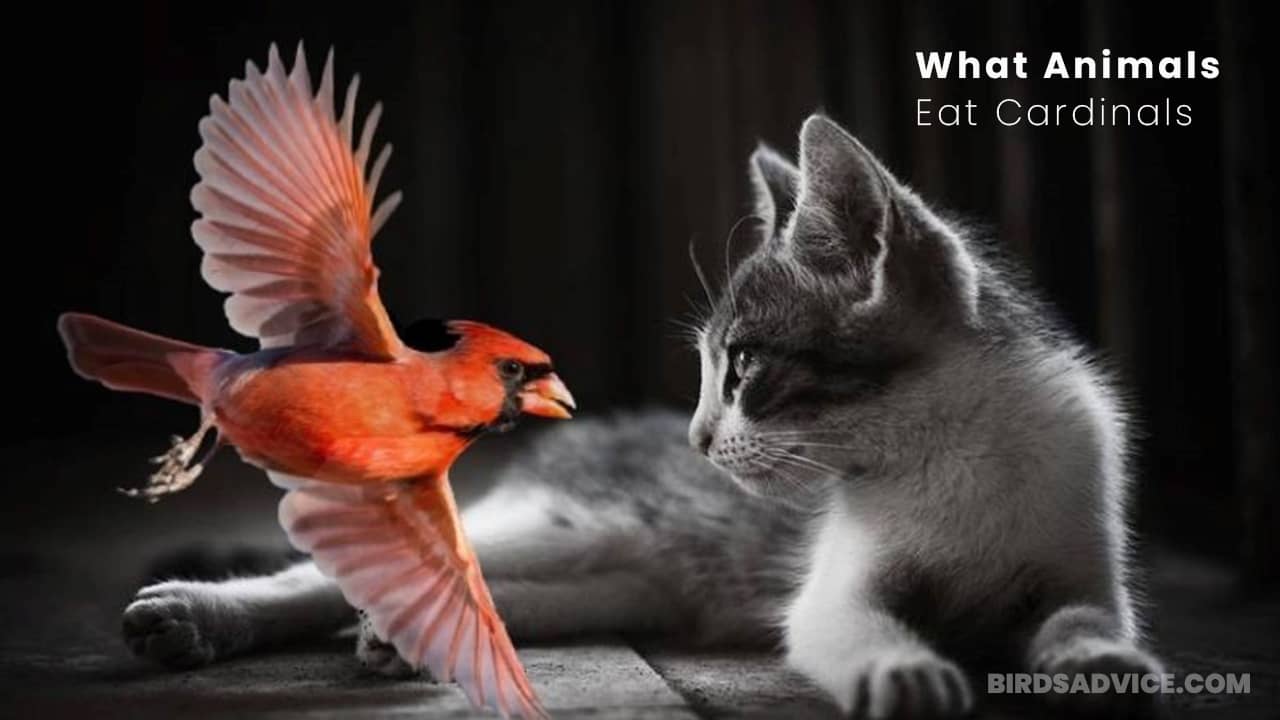 Are you searching for the animals that eat cardinals and their eggs? Thanks to the ground-feeding habit, cardinals are vulnerable to reptiles, larger predator birds, and a few mammals. Some animals just kill cardinals, while others feed on the eggs only.

Contents show
1 What Animals Feed On Cardinals?
2 What Animals Prey On Cardinal Eggs?
3 Do Reptiles Eat Cardinals and Their Eggs?
4 How Can You Help Cardinals from Predators?
4.1 #1. Protect Cardinals from House Cats
4.2 #2. Place The Feeders at the Safe Spot
4.3 #3. Hang Feeders without Perches
4.4 #4. Elevate the Cardinal-Friendly Nesting Boxes
5 Final Words

So, what animals eat cardinals? Some birds of prey are cardinal predators, including hawks, owls, eagles, shrikes, falcons, blue jays, and crows. In the list of predators, there are a few mammals, such as cats, dogs, foxes, squirrels, rodents, and chipmunks. Northern cardinals are also vulnerable to reptiles like snakes.

In this article, we’re going to talk about these animals, along with how to keep predators away from cardinals. Once you ended the article, we recommend you take a look at our recently published article on “Can Humans Eat Cardinals?”

What Animals Feed On Cardinals?

Cats are more successful at catching cardinals than dogs and foxes. Among mammals, cats are the most dangerous threats for cardinals. They don’t attack cardinals during flight, but they grab the cardinals directly from their nests.

When it comes to the list of cardinal predators, birds of prey are the most. Different types of hawks, owls, eagles, shrikes, and falcons are the predators of cardinals. The list also includes blue jays and crows. When on the ground, cardinals are much vulnerable to snakes.

What Animals Prey On Cardinal Eggs?

Many large birds of prey, including hawks and owls, love to eat cardinal eggs. Besides, smaller birds like blue jays and shrikes like to feed on cardinal eggs. Furthermore, various snakes attack cardinal eggs when the mother cardinals are not in the nests.

Not only birds of prey, but some small mammals like chipmunks and squirrels love to feast on cardinal eggs. However, dogs, foxes, and cats don’t prefer feeding on cardinal eggs because they’re not enough meals for the mammals.

Do Reptiles Eat Cardinals and Their Eggs?

As cardinals mostly eat treats on the ground, they are much vulnerable to reptiles like snakes that can catch the cardinals and feed on them. Reptiles also attack cardinal eggs and even hatchlings secretly, hiding in the bushes where cardinals make nests.

The snakes that eat cardinals and their eggs are milk snakes, king snakes, garter snakes, water snakes, etc. They usually live near the cardinal habitat. Once they get an opportunity, they attack cardinals, particularly eggs, hatchings, and juveniles, during the absence of mothers.

How Can You Help Cardinals from Predators?

Here are some tips to keep cardinals away from predators.

In order to protect cardinals in your yard, you should keep house cats indoors as much as possible. If they need to go outdoors, put a bell collar on them so that cardinals are warned about their coming. Don’t let the cats do outside during peak hours in the morning.

#2. Place The Feeders at the Safe Spot

When you’re going to place the feeders for cardinals, make sure to place them 10 to 12 feet away from bushes and shrubs so that predators cannot reach the feeder. Consequently, cardinals can keep an eye on potential predators who are hiding in the dense shrubs.

If you’re going to place cardinal-friendly nesting boxes, make sure to keep them much higher off the ground (at least 8 feet above) to protect cardinal eggs, baby cardinals, and parent cardinals from predators like squirrels, snakes, raccoons, and cats.

Predators are the real threats to cardinals. If you love cardinals, you should protect them from potential predators. Keep your pet cats inside your house as much as possible. Make sure to place the feeders and the nesting boxes at the safe spot so that snakes cannot harm cardinals.

However, we hope you have learned a lot about the predators of cardinals and how to protect cardinals from those predators. If you have any experience in protecting cardinals from predators, you can share it with us. Keep attracting lovely cardinals to your yard.